Trump on track for landslide victory in 2020 election: Report

TEHRAN, Mar 23 -US President Donald Trump could sail to victory in the 2020 presidential elections despite historically low approval ratings and poor public support for his so-called America First agenda, according to multiple economic models. 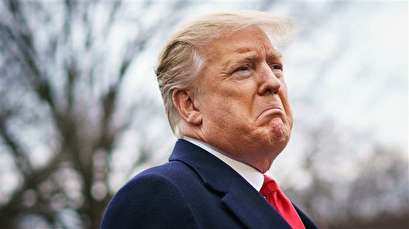 TEHRAN, Young Journalists Club (YJC) -Strong economic figures and the advantage of his incumbency could provide him a second term in the White House, according to a report by Politico that cited the models, which have consistently predicted winners and losers in US presidential elections.

Trump’s re-election could also be propelled by low gas prices and unemployment numbers, as well as rising wages and other increasing growth rates.

Still, the president’s prospects could suffer if the economy slows and unemployment rates begin to tick upwards, according to the models.

“The economy is just so damn strong right now and by all historic precedent the incumbent should run away with it,” Donald Luskin, chief investment officer of Trend Macrolytics, told Politico.

Ray Fair, an economics professor at Yale University who led the creation of such economic models, echoed Luskin’s predictions in the report, adding that his models showed the president securing a second term by a “fair margin”.

“Even if you have a mediocre but not great economy – and that’s more or less consensus for between now and the election – that has a Trump victory and by a not-trivial margin,” Fair said.

However, Trump could still face an uphill battle towards re-election due to a series of federal investigations against him, as well as a growing pool of 2020 Democratic candidates vying to take him on.

A report by US Special Counsel Robert Mueller’s probe on alleged Russian election meddling during the 2016 US election could prove damaging to Trump’s total support ahead of the crucial vote, while new probes could be launched into alleged criminal misconduct on behalf of the president surrounding hush money payments to women he had affairs with.