Trump’s move on Golan will lead to war with Israel: Experts

TEHRAN, Mar 26 -US President Donald Trump’s formal recognition of Israeli sovereignty over the occupied Golan Heights, a Syrian territory, has assured that Israel will be in a perpetual state of war with its Arab neighbors for many decades, according to experts. 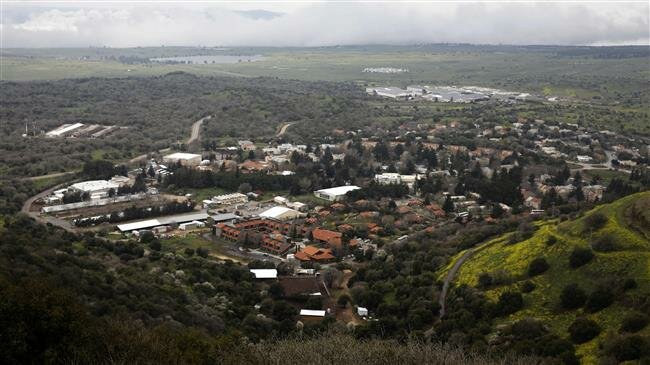 TEHRAN, Young Journalists Club (YJC) -Trump signed a proclamation recognizing Israeli sovereignty over the Syrian territory on Monday as Israeli Prime Minister Benjamin Netanyahu and Trump's Jewish son-in-law and adviser Jared Kushner were standing at his side in the White House in Washington, DC.

For many Arabs, the decision destroyed any hope that there will one day be a negotiated peace deal between Israel and the Palestinians and increased doubts that Washington is an impartial mediator, analyst say.

Trump’s decision, following US recognition of Jerusalem al-Quds as Israel’s capital in December 2017, could also tempt other regimes to annex land, undermine Washington’s so-called peace plan between Israelis and Palestinians and tilt Israel back into conflict with its Arab neighbors, Middle East analysts say.

“Donald Trump has made sure that Israel will be in a perpetual state of war with its Arab neighbors for many decades to come,” said Fawaz Gerges, professor of international relations at the London School of Economics and author of the book Making the Arab World.

“What Trump has done is to hammer a deadly nail in the coffin of the peace process and Arab-Israeli reconciliation. This is a fundamental turning point. There is nothing left to discuss anymore," he told Reuters.

Trump’s move is, according to many analysts, partly intended to boost his own chances of re-election in 2020, by appealing to US evangelical Christians, a loyal voter base who believe that the gathering of the Jews in Israel is a prerequisite for the return of Jesus.

The announcement on the Golan Heights was the latest in a series of decisions that are widely seen as strategy to redraw the contours of the Israeli-Arab conflict.

In 1967, Israel waged a full-scale war against Arab territories, during which it occupied a large swathe of Golan and annexed it four years later, a move never recognized by the international community.

Jerusalem al-Quds was also occupied by Israel in 1967 and then annexed in a move that is legally repudiated internationally.

White House officials claim that the issues of Jerusalem al-Quds and the Golan Heights must be the basis for legitimate peace negotiations.

Dennis Ross, a veteran Middle East negotiator, suggested that US recognition of Israel’s sovereignty over the Golan Heights could embolden the Israeli right-wing to step up its push for annexing settlements in the occupied Palestinian West Bank.

“I worry that the right in Israel can say ‘they recognized this. It will be a matter of time before we can annex all or part of the West Bank’,” he said. “That would be the end of the two-state solution.”

Trump’s aides have indicated privately that they believe his moves on Jerusalem al-Quds have provoked a less severe reaction in the Arab world than experts had predicted, a person familiar with the matter said on condition of anonymity.

Aides’ advice to Trump on recognition of Israeli sovereignty over the Golan Heights was that Washington could again weather the storm, the same person said.

John Bolton, Trump’s national security adviser and one of the administration’s leading Iran hawks, was an important proponent of the policy shift, the official said.

The Trump administration has identified Iran as its main target in the Middle East, and withdrew from an international nuclear deal signed by Tehran, the US and other world powers in 2015.