US special envoy for North Korea travels to China

TEHRAN, Mar 26 -The United States’ special envoy for North Korea is in China in an apparent move to seek Beijing’s assistance in reviving negotiations between Washington and Pyongyang. 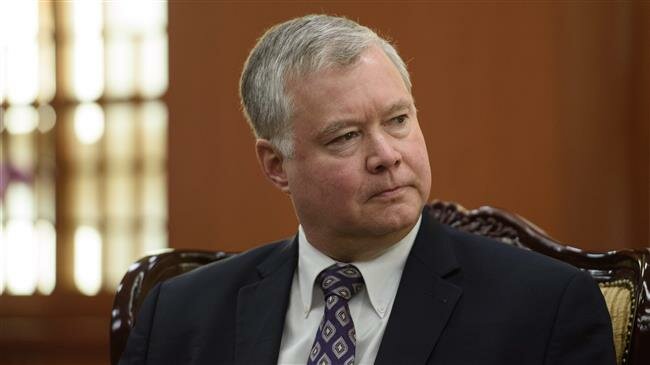 TEHRAN, Young Journalists Club (YJC) -The special representative, Stephen Biegun, arrived in Beijing on Sunday “to continue US-China coordination on policies related to North Korea,” according to the US Embassy in China.

The embassy gave no details about the arrangements of Biegun’s meetings.

Previously, he visited Beijing in September 2018 and in January this year, when he met China’s special representative for Korean Peninsula affairs, Kong Xuanyou.

Both of those trips happened before the second summit between US President Donald Trump and North Korean leader Kim Jung-un in Vietnam, which collapsed in February. While Trump claimed he had “had to walk away” from the talks because of the North’s demands to lift all economic sanctions against Pyongyang, North Korean Foreign Minister Ri Yong-ho said his country had never asked for the removal of all sanctions but was only seeking their partial removal.

Citing observers in Beijing, English-language newspaper South China Morning Post wrote that Biegun’s visit to China suggested Washington was looking for Beijing to play a role in breaking the deadlock with Pyongyang.

“It is clear that the Trump administration still seeks to negotiate with North Korea over dismantling its nuclear weapons program,” the newspaper quoted Cheng Xiaohe, a Korean affairs expert as saying in Beijing.

In mid-march, North Korea warned that it was considering suspending talks with Washington and resuming its nuclear and missile tests, which it has voluntarily suspended.

Trump on the same day (Friday) said he would be withdrawing his own administration’s new sanctions in what was seen as a sweetener to North Korea.

Despite Trump’s rare move to withdraw the new sanctions, his administration has long said that the many sanctions the US has already placed on North Korea will remain in place until Pyongyang completely and irreversibly dismantles its nuclear program.

The North has said any denuclearization negotiated with America will only be phased.