TEHRAN, Mar 27 - British Prime Minister Theresa May will address her Conservative lawmakers on Wednesday, possibly to set out a timetable for her departure in a last throw of the dice to win support for her twice-rejected Brexit deal in parliament. 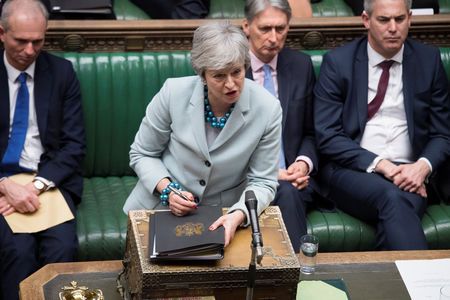 TEHRAN, Young Journalists Club (YJC) - At her weakest after parliament on Monday seized control of Brexit, May has yet to give up hope of winning approval for her deal to leave the European Union, which she says is the only way of ensuring an orderly exit that will protect the economy.

Parliament's move seemed to have focused minds, with some eurosceptic lawmakers saying they could back her plan before choosing a new leader for the next phase of talks with the EU. But as yet her Northern Irish powerbrokers remained opposed.

One Conservative lawmaker said May's decision to address the party's so-called 1922 Committee at 1700 GMT on Wednesday suggested she could set her date of departure to win over that support.

But others cast doubt on whether May, who has so far weathered at least two attempts to oust her, would commit to step down without a firm guarantee of support for her deal.

Nearly three years after the 2016 EU membership referendum, and three days before Britain was originally supposed to leave the bloc, it remains unclear how, when or even if Brexit will take place, with parliament and the nation deeply split.

May could try to bring her deal back to parliament on Thursday for a third vote on Britain's biggest trade and foreign policy shift for more than 40 years, but her spokesman said the government would only do that if it had a chance of winning.

Her cabinet team of ministers met on Tuesday, digesting Monday's votes but also trying to plot a way of winning over the 75 lawmakers it must convince to get the so-called Withdrawal Agreement negotiated with the EU through parliament.

"They had a long discussion both in relation to the votes which took place last night and on the work which is ongoing to build support for the government's deal to allow us to leave the EU in an orderly way as soon as possible," the spokesman said.