TEHRAN, Mar30-Washington risks losing the Turkish arms market altogether if it continues to delay the delivery of F-35 agreed upon with Ankara, as the nation can simply switch to buying warplanes from Russia, RT was told. 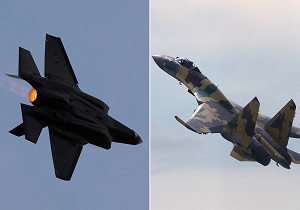 TEHRAN, Young Journalists Club (YJC) -"If the US fails to ship the jets to Turkey, Ankara can certainly buy the Su-35s from Russia instead," Viktor Litovkin, a military analyst with the Moscow-based TASS news agency, told RT.

Both aircraft have comparable characteristics, the expert said, adding that Moscow won't be risking leaking its sensitive military tech overseas, because the jets' software is hard to crack. It won't require much effort to smoothly integrate the planes into the Turkish military, either.

Politicians in Washington have been trying to pressure its crucial NATO ally Turkey to drop a major deal on buying S-400 anti-air missile defense systems from Moscow. This week, US Senators tabled a draft bill, calling for a ban on the transfer of 100 F-35s, previously agreed with Turkey, unless the nation guarantees that it won't get weapons from Russia. The delivery of the US-made planes was already effectively blocked by Senate last year.

The Turkish leadership, meanwhile, strongly defended its right to buy arms from whoever it wants, and repeatedly reaffirmed that it will stick to the S-400 contract.

The attempts to pressure Ankara are "a sign of unfair competition" the US employs to "steamroll" the sale of its own anti-air missile defense system, MIM-104 Patriot Pac 3, Litovkin said. He believes that Washington is likely to continue blackmailing its ally for as long as it can, but at some point will be forced to concede and deliver the promised jets to Turkey.