Turkey voting in local elections seen as test for Erdogan

TEHRAN, Mar31-Millions of people in Turkey are flocking to polling stations to vote in local elections, which is seen as a gauge of support for President Recep Tayyip Erdogan. 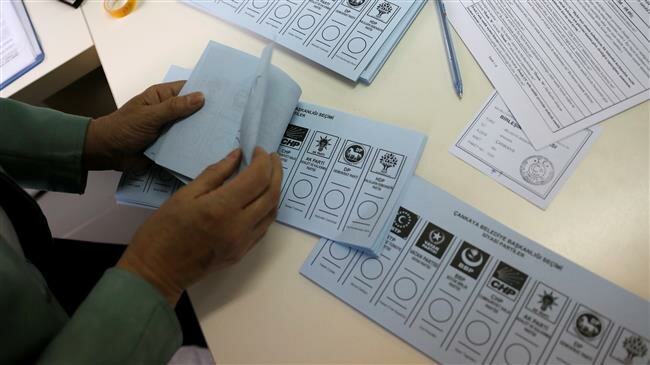 TEHRAN, Young Journalists Club (YJC) -Turks began electing scores of mayors, municipal councils, and other local officials on Sunday. Some 57 million people are eligible to vote, and primary results could start coming out as early as Sunday night.

Erdogan and his Justice and Development Party (AKP) have won every election since the party first came to power in 2002. The head of the Turkish state celebrated a major win in April 2017, when the public voted in a referendum in favor of the adoption of a presidential system that expanded his powers.

The local elections on Sunday are the first ones since the system was adopted. The results could approximately show how much support the Turks still have for an executive presidency headed by Erdogan.

The president is credited with remarkably boosting the country’s economy with his savvy to attract foreign investment and invigorate the tourism industry. But Turkey is also experiencing recession, and the inflation is in double digits, posing a risk to the AKP’s chances in the capital, Ankara, and the most populous city of Istanbul.

Recent polls, cited by AFP, showed that Mansur Yavas, the candidate for the opposition Republican People’s Party CHP and the nationalist Good Party, might have a stronger chance of winning.

A loss by Erdogan and the AKP’s candidates for the metropolises would translate into a loss of political control.

‘We will solve Syria issue, on the field!’

While campaigning for his party, the Turkish president has stressed the importance of fighting secessionist Kurdish groups active on Syria’s border with Turkey, most notably the YPG.

On Saturday, Erdogan, who has been holding a dozen promotional rallies in Istanbul, addressed a crowd in the city, saying, “We will definitely solve [the] Syria issue on the field, if possible, and not on the table, as the first work after elections,” Turkish paper Hurriyet reported.

Turkey associates the United States-backed YPG with anti-Ankara separatists and has been maintaining unauthorized military presence on the Syrian soil to push them back.