TEHRAN, Apr 04 - Political jokes about former US Vice President Joe Biden, a possible contender for the Democratic Party’s 2020 presidential nomination, are what could derail his candidacy, says an American political analyst. 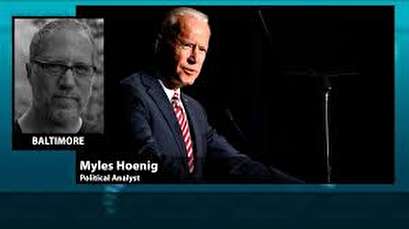 TEHRAN, Young Journalists Club (YJC) -Biden, who has long been touted as a serious rival for President Donald Trump in the upcoming vote, stands accused of improper touching by several women, allegations that have seriously undermined his chances to run a presidential campaign.

“What Biden is accused of is not news, in the sense that people didn’t know about this,” Myles Hoenig told Press TV on Wednesday.

The analyst said while many in entertainment industry and other fields had managed to get away with serious crimes, Biden and other political figures had no similar chances.

“Politics is far less forgiving. One can be accused of white supremacy and get a slap on the wrist like Representative King and even President Trump, but sexual harassment is a much harder accusation to slide by,” he argued.

“But it likely won’t be these charges that could bring Biden down but the political humor targeting him over this that could be more indelibly written into people’s minds about him.”

“One of the more salacious memes is Biden caressing the Statue of Liberty. If the memes continue, and late night jokes about him proliferate, he may not be able to live it down and if a candidate, it will make for an easy target against him.”

Two women have accused former US vice president of touching them inappropriately at events, bringing the total number of females who have complained publicly about the potential 2020 Democratic presidential candidate to four.

Two more women have accused former US Vice President Joe Biden of touching them inappropriately at events, bringing the total number of females who have complained publicly about the potential 2020 Democratic presidential candidate to four.

The string of accusations began after Lucy Flores, a former member of the Nevada state Legislature, accused Biden of "demeaning and disrespectful" behavior when he allegedly kissed the back of her head.

Biden has defended his interactions with women, saying he doesn't believe he's ever acted inappropriately as he scrambles to contain a quickly growing crisis for his planned election campaign.

The accusations have prompted some Democrats to question whether the 76-year-old is too out of step with his own party to run a successful 2020 presidential campaign.