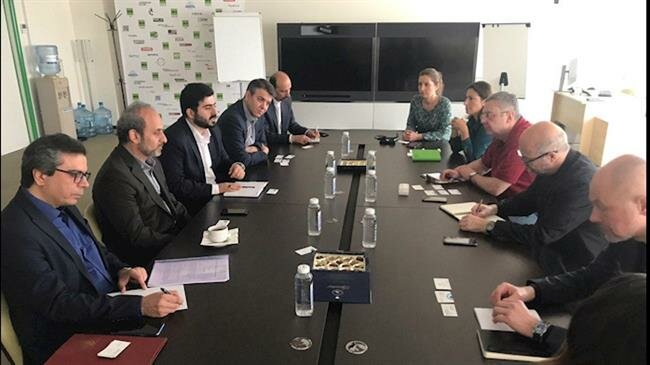 TEHRAN, Young Journalists Club (YJC) - Peyman Jebelli, who is the CEO of the Islamic Republic of Iran Broadcasting (IRIB)’s World Service, made the remark in a meeting with RT's Managing Director Alexey Nikolov in the Russian capital of Moscow, IRIB News reported on Friday.

Jebelli said that since similar restrictive measures had been taken against Iranian and Russian media by Western media regulators, Moscow and Tehran could step up legal and media cooperation to confront those measures.

He said the “double standards” and the “discriminatory” policies exercised by Western media regulators was most evident in their behavior toward the IRIB’s Press TV and the anti-Iran, London-based “Iran International” channel.

In September 2018, “Iran International” invited the spokesperson for a terrorist group to a live show during which he took responsibility for a terrorist attack that had been carried out in Iran just earlier.

The terrorist attack killed at least 25 people — including women and children — and injured 60 others.

British media watchdog Ofcom failed to take any action against the anti-Iran channel.

In 2012, Ofcom revoked the license of Press TV. It has threatened to do the same with RT.

Facebook and Twitter have also stepped up crackdowns against Russian and Iranian pages and users on the pretext of fighting foreign “misinformation campaigns.”

Nikolov said that RT correspondents were being targeted in a Western pressure campaign. He said their pages on social media were being taken down and dozens of lawsuits were being filed against them at Western courts as part of that campaign.

Press TV and RT have already taken steps to expand media cooperation. Last year, Jebelli and Nikolov signed a memorandum of understanding for cooperation in Tehran.

In the meeting in Tehran, Nikolov said RT was “looking forward to working with Press TV and with our Iranian colleagues for the many years to come.”

Speaking in Moscow, Jebelli stressed that cooperation between Press TV and RT was at a high level and that he looked forward to expanding this cooperation “to various fields,” including staff training, technical cooperation, and experience sharing.