TEHRAN, May 09 -North Korea says its recent rocket drills were part of the country’s “regular” and “self-defensive” military training and did not target anyone. 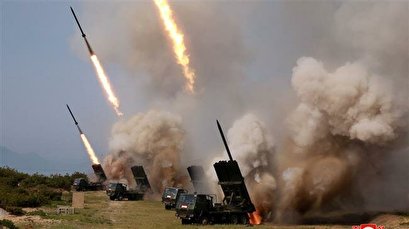 TEHRAN, Young Journalists Club (YJC) -"The recent drill conducted by our army is nothing more than part of the regular military training, and it has neither targeted anyone nor led to an aggravation of the situation in the region," an unidentified North Korean foreign ministry spokesperson said in a Wednesday statement to the state-run KCNA news agency.

The "strike drill" on May 4, which was overseen by North Korean Supreme leader Kim Jong-un, included the launch of rockets and at least one short-range ballistic missile.

Acting US Defense Secretary Patrick Shanahan told a congressional hearing on Wednesday that North Korea launched "rockets and missiles," the first time the Pentagon has detailed what it believes Pyongyang fired.

It came in the wake of talks with the United States and South Korea stalling in February, and raised alarms in both countries, which have been seeking to entice the North into abandoning its nuclear weapons and ballistic missile programs.

Seoul responded on Saturday by calling on its northern neighbor to "stop acts that escalate military tension on the Korean Peninsula."

US President Donald Trump, who has met with Kim twice, said on Saturday he was still confident he could have a deal with Kim, and US and South Korean officials have subsequently played down last week's tests.

Trump and Kim met at a historic summit for the first time in June last year in Singapore, where they agreed to work toward the denuclearization of the Korean Peninsula. Subsequent diplomacy between the two sides, however, made little progress, mainly because Washington refused to lift its crippling sanctions.

Washington has refused to offer any sanctions relief in return for several unilateral steps already taken by North Korea. Pyongyang, on the other hand, has suspended its missile and nuclear testing, demolished at least one nuclear test site, and agreed to allow international inspectors into a missile engine test facility.