American Cemetery is the name of this photo. It is a retelling of the Operation Eagle Claw which was overwhelmed by sandstorm in the Iranian desert of Tabas in 1980 to become an international debacle. 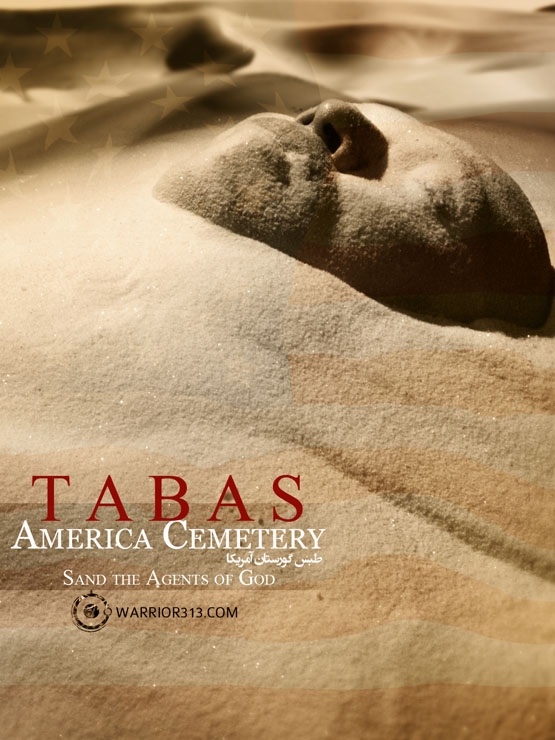 On February 14, 1979, armed Iranians stormed the [U.S.] embassy and took 102 Americans hostage. After the Ayatollah's forces intervened and returned control of the embassy to the United States, they allowed the USAF to fly one final C-141 evacuation mission. After that, the U.S. State Department chartered 13 commercial Boeing 747 airliners, which flew an additional 4,099 people out of the country. By March 1, 1979, the U.S. government decided to evacuate all of its citizens except for a minimal staff at the embassy and at several corporate headquarters. Through the rest of the year tensions remained high and in the autumn the U.S. government allowed the exiled Shah to receive cancer treatment in the United States. That action angered many Iranians, and frustration boiled over on November 4, 1979, when Iranians again seized the embassy, along with the Iranian Foreign Ministry, and took 66 U.S. personnel hostage. Thirteen hostages were later released, leaving 53 remaining in Iranian custody. For the remainder of his term, President James E. Carter, Jr., sought their release through a variety of means. None were successful and he soon turned to the U.S. military. After considering several options, President Carter decided to authorize a military rescue operation.

Because the U.S. military had no force ready to conduct such an operation in an area in which the United States had few bases or resources, the mission required five months of intensive planning by personnel from all service branches and the Central Intelligence Agency before receiving the President's approval. Known as Operation Eagle Claw, it called for three USAF MC-130s to carry a 118-man assault force from Masirah Island near Oman in the Persian Gulf to a remote spot 200 miles southeast of Tehran, code-named Desert One. Accompanying the MC-130s were three USAF EC-130s which served as fuel transports. The MC-130s planned to rendezvous with eight RH-53D helicopters from the aircraft carrier USS Nimitz. After refueling and loading the assault team, the helicopters would fly to a location 65 miles from Tehran, where the assault team would go into hiding. The next night, the team, dependent upon trusted agents, drivers, and translators, would be picked up and driven the rest of the way to the embassy compound. After storming the embassy, the team and the freed hostages would rally at either the embassy compound or a nearby soccer stadium to be picked up by the helicopter force. The helicopters would then transport them to Manzariyeh, 35 miles to the south, by that time secured by a team of U.S. Army Rangers. Once at Manzariyeh USAF C-141 transports would fly the assault team and hostages out of Iran while the Rangers destroyed the remaining equipment (including the helicopters) and prepared for their own aerial departure. An extremely complex operation, Eagle Claw depended on everything going according to plan. Any deviation could cause the entire operation to unravel with possibly tragic consequences.

In the weeks before the mission, USAF combat controllers covertly deployed into Iran to prepare the landing site at Desert One. The mission began on April 24, 1980, when the first MC-130, carrying the mission commander and USAF combat controllers, arrived at the landing site. The combat controllers were tasked with establishing the airstrips and marshalling the aircraft once they had landed. Soon after the first MC-130 arrived, the plan began to fall apart. First, a passenger bus approached on a highway bisecting the landing zone. The advance party was forced to stop the vehicle and detain its 45 passengers. Soon, a fuel truck came down the highway. When it failed to stop, the Americans fired a light anti-tank weapon which set the tanker on fire and lit the surrounding area. Finally, a pickup truck approached but turned around and departed the area. The assault team commanders, however, decided to continue with the mission. Soon the other five MC-130s aircraft arrived at Desert One to wait for the helicopters. The RH-53 helicopters departed the Nimitz and were en route to Desert One. During the flight, two helicopters aborted because of flight instrument and mechanical problems while the pilot of a third helicopter decided to continue on to Desert One despite hydraulic problems. Soon the remaining six helicopters encountered an unexpected severe dust storm and proceeded individually to Desert One, arriving nearly an hour behind schedule.

Once at Desert One, the RH-53 with hydraulic problems could not be repaired, which left the team with one less helicopter than was required to carry the assault team and hostages. With just five helicopters available, the on-scene commander aborted the mission. The plan then shifted to getting the assault team back on the MC-130s while the helicopters refueled and returned to the Nimitz. At that point, tragedy struck. One of the helicopter's rotor blades inadvertently collided with a fuel-laden EC-130. Both aircraft exploded, killing five airmen on the EC-130 and three marines on the RH-53. The team commanders ordered the remaining helicopters abandoned and everyone to board the EC-130s, which soon departed for Masirah Island. With that, Operation Eagle Claw came to an end. President Carter was notified of the mission's failure, and the wreckage at Desert One was broadcast to the world by the Iranian government. In the remaining months of his presidency President Carter continued to work toward the hostages' release, although the government of Iran did not do so until the day of President Ronald W. Reagan's inauguration on January 20, 1981.