TEHRAN, Jun 4 -While poisonings from ingestion of the pods are down slightly, researchers say more can be done to prevent children from eating them. 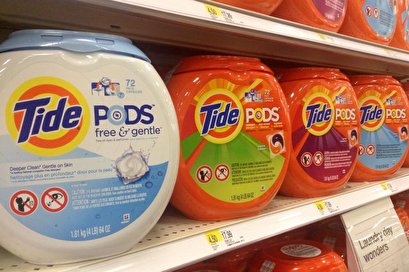 Such poisonings fell just 18 percent between 2015 and 2017, a new study reports. From 2012 to 2017, poison control centers fielded nearly 73,000 calls about poisoning from these pods. That's about one call every 42 minutes, and almost 92 percent involved kids under 6.

"The current voluntary standard, public awareness campaigns and product and packaging changes to date are good first steps, but the numbers are still unacceptably high -- we can do better," said lead researcher Dr. Gary Smith. He is director of the Center for Injury Research and Policy at Nationwide Children's Hospital in Columbus, Ohio.

Detergent pods first appeared in 2012 and were marketed as pre-measured packets, a way to make washing clothes more convenient.

But their colorful appearance made them attractive to children, and soon there was a flurry of reports about kids who swallowed the poisonous chemicals in the packets. In late 2017, the "Tide Pod challenge" made headlines, where teenagers dared one another to bite into the packets and post video on social media.

In 2013, manufacturers reacted to the wave of poisonings by making the pods opaque, putting latches on the bins that hold them and adding warning labels.

In addition, the American Academy of Pediatrics and other groups tried to raise public awareness about the dangers.

A voluntary safety standard for liquid detergent packets was adopted in 2015. But Smith said the decrease in poisonings that followed is far less than the 40 percent to 55 percent drop that followed passage of the Poison Prevention Packaging Act of 1970. That law requires a number of household products to be sold in childproof packaging.

"This demonstrates that the current liquid laundry detergent safety standard is not adequate as currently written," Smith said. "But there are opportunities to strengthen the standard."

For the study, Smith and his team used information from the National Poison Data System.

The researchers found that between 2012 and 2017, exposures to detergent pods among kids 6 and over skyrocketed nearly 300 percent.

During that time, eight people died -- two children under age 2 and six adults 43 and older, the data showed. The adults who died had histories of dementia or developmental disabilities.

Smith called on doctors to continue warning patients and their families about the hazards and the importance of keeping detergent packets away from children. He noted that adults with dementia, Alzheimer's disease or developmental disabilities may mistake them for candy.

Those caring for such adults or children under 6 years of age should use traditional laundry detergent instead of packets, Smith said.

Dr. Barbara Pena, research director and attending emergency physician at Nicklaus Children's Hospital in Miami, reviewed the findings. She urged parents to treat detergent packets like medicines and keep them away from kids. And she called on manufacturers to take steps to ensure that canisters holding these packets are impossible for a child to open.

"These canisters need to be childproof. That's when you will see a reduction in poisonings," Pena said. "It may be easier to just use regular detergent."

If someone does ingest detergent, call poison control and follow the instructions, she said.