Any use of chemical weapons, a grave violation of 1925 protocol :Ban

Tehran, YJC. -- UN Secretary-General Ban Ki-moon in his message on the Day of Remembrance for Victims of Chemical Warfare, 29 April 2014, reiterated that any use of chemical weapons under any circumstances would be a grave violation of the 1925 Protocol and other relevant rules of customary international law. 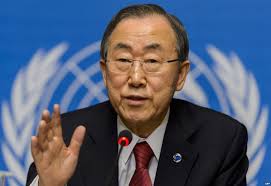 The full text of his message reads:
On this annual Day of Remembrance, we pay tribute to the victims of chemical warfare.
The horrific use of chemical weapons in the Syrian Arab Republic in 2013 casts a shadow over this year’s commemoration. I cannot forget the deeply shocking images  I saw. The use of chemical weapons in Syria was a deplorable offense against humanity.
The multinational effort to rid Syria of its chemical weapons programme shows what can be done when the international community comes together. Although there is still more  to do, 90 per cent of Syria’s chemical weapons have now been either removed or destroyed.
I take this opportunity to reiterate that any use of chemical weapons under any circumstances would be a grave violation of the 1925 Protocol and other relevant rules of customary international law.
I also reiterate the importance of the 1997 Chemical Weapons Convention.  Six countries remain outside the Convention: Angola, Egypt, Israel, the Democratic People’s Republic of Korea, Myanmar and South Sudan.
Until membership is universal and the last stockpiles of chemical weapons are destroyed, our work will not be done. We must not relax our vigilance. We must do our utmost  to deter any future incidents.
On this solemn day, let us renew our common pledge to eliminate all chemical weapons. I once again urge all States that have not yet done so, to adhere to the Convention without delay.  Only then can we finally put to rest the threat of chemical weapons.
Share to
Tags
chemical weapons ، Ban Ki Moon ، 1925 protocol
Your Comment