A rare speech from a secretary of state: Israel risks turning into an 'apartheid state'

If the Israeli-Palestinian conflict remains unresolved for much longer, Israel could turn into 'an apartheid state with second class citizens,' says Kerry.
If a two-state solution isn't agreed upon soon, Israel will risk becoming "an apartheid state," U.S. Secretary of State John Kerry said on Friday while speaking before a closed forum.
Kerry used the term - rarely heard from American officials - while speaking at the Trilateral Commission before senior officials from the U.S., Europe, Russia and Japan, The Daily Beast reported. 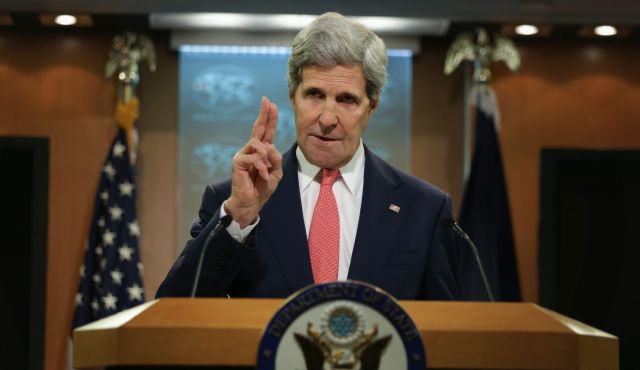 "A two-state solution," Kerry said, "will be clearly underscored as the only real alternative. Because a unitary state winds up either being an apartheid state with second class citizens—or it ends up being a state that destroys the capacity of Israel to be a Jewish state.
"Once you put that frame in your mind, that reality, which is the bottom line, you understand how imperative it is to get to the two state solution, which both leaders, even yesterday, said they remain deeply committed to.”
Kerry also said that at some point he might unveil his own peace proposal, and tell both sides to either "take it or leave it.”
During his talk, a recording of which was procured by The Daily Beast, Kerry also suggested that a change in the leadership of either Israel or the Palestinians could make a breakthrough more feasable. He also reiterated his conviction that both sides share the blame for the negotiations' dead end.
'A need for a pause'
U.S. State Department Spokeswoman Jen Psaki reffered to the talks' impasse on Friday while speaking with reporters. "[Kerry's] view is this is a moment of transition and part of the process. We are in a holding period where parties need to figure out what is next. [...] We have always thought there could be a point where we needed to pause and both sides needed to look at what was possible. And we're clearly at that point now."
She also said that Palestinian President Mahmoud Abbas promised Kerry that the new government that will be formed following the Palestinian reconciliation will recognize Israel.
On Thursday, a senior Israeli official told Haaretz that the Israeli leadership is disappointed with the 'weak' American reaction to the Fatah-Hamas reconciliation agreement, and demands a clearer, more resolute response.
Source: haaretz
Share to
Tags
Kerry ، Israel ، apartheid
Your Comment