'Yellow vests' keep up march against Macron, 30 weeks on

TEHRAN, Jun 8 -Around 1,100 'yellow vests' marched in suburban Paris on Saturday, June 8, on their 30th round of protests, pushing on with their fight for greater purchasing power and better working conditions. 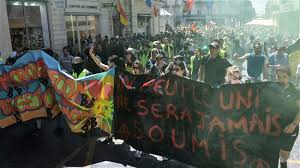 TEHRAN, Young Journalists Club (YJC) - The vests themselves tell the story of the movement that has gripped France for more than six months, at one point becoming the biggest challenge of President Emmanuel Macron's presidency.

A protester who is currently unemployed, Gilles Sabatier, has launched a newsletter collecting images of the slogans and illustrations on the backs of the high-visibility vests, the symbol of the grassroots movement which aims for protesters to be seen and heard.

"Each person, each 'yellow vest' (protester), puts what he feels, and it's always very, very personal and full of creativity, and always rooted in the struggle," Sabatier said, surrounded by protesters whose vests contain caricatures of Macron and catchphrases like "Take back control of our destiny."

The majority of the protesters have been spending nearly every Saturday of the past months on the street, sometimes with their spouse and children. Friendships have grown amidst the shared struggles and weekly gatherings.

"We are here. Even if Macron doesn't want it, we are here. For the honour of workers, for a better world," goes the popular chant.

But number of protesters has been waning in past weeks, with national turnout estimated at 3,700, a far cry from the close to 300,000 that first occupied roundabouts and blocked roads in November 2018 in what began as an outcry against fuel tax hikes.

That will provide some relief for Macron, who was forced to put some reforms on hold and make costly concessions to try and contain the unrest and find ways to boost purchasing power.

French police have also come under scrutiny from rights groups over the use of heavy duty crowd control weapons including "flash ball" riot guns that fire rubber ball-shaped projectiles.