Iran, YJC. -- Iranian President Hassan Rouhani underscored the country's readiness to further expand relations and cooperation with the United Nations Educational, Scientific and Cultural Organization (UNESCO).
Rouhani made the remarks in a meeting with Director-General of UNESCO Irina Bokova in Tehran on Tuesday.
The president underlined the Islamic Republic of Iran's preparedness to develop and deepen cooperation with UNESCO, and said, "Tehran is ready to have close interactions with UNESCO in fighting the spread of cultural poverty and in promoting education." 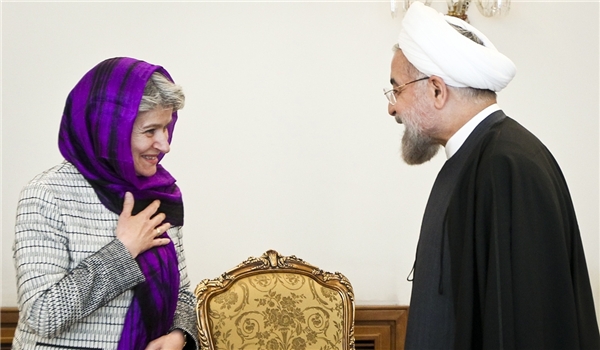 Rouhani also emphasized the contemporary world's need to establish peace and stability, and said, "The first and most important step to fight violence, extremism and terrorism is the cultural step and UNESCO can play a valuable role in this regard."
Bokova, for her part, hailed the Iranian president's initiative for creating a world free from violence and extremism, and said, "The Islamic Republic of Iran's proposal at the UN General Assembly was highly valuable and completely based on UNESCO's mission, statute and goals."
The UNESCO chief arrived in Tehran on Friday for a five-day visit.
This is the first visit to Iran by a UNESCO director-general in ten years.
In November, Bokova hailed Iran for its rich culture and scientific advancements, and described the country as a good cultural partner for UNESCO.
"UNESCO’s regional office in Tehran is important to us and we will soon appoint and introduce a director for the office,” Bokova said in a meeting with Iranian Minister of Science, Research, and Technology Reza Faraji Dana in Paris on the sidelines of a UNESCO annual meeting.
She termed Iran as a country with glorious culture and civilization.
UNESCO's purpose is to contribute to peace and security by promoting international collaboration through education, science, and culture in order to further universal respect for justice, the rule of law, and human rights along with fundamental freedom proclaimed in the UN Charter.
UNESCO has 195 member States (it recently added Palestine in November 2011) and nine Associate Members.