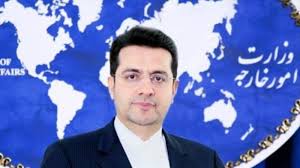 TEHRAN, Young Journalists Club (YJC) - “We express concern about today’s suspicious incidents involving Japan-related trade oil tankers that occurred simultaneous with the meeting between that country’s (Japan’s) prime minister and Leader of the Revolution,” Mousavi said in a post on his Twitter account on Thursday.

Iran believes that the incident runs counter to the regional and extra-regional efforts and policies for reducing tensions and creating calm in the region, he added.

On Thursday, the Iranian maritime rescue forces evacuated the crew of two large oil tankers hit by two successive blasts in the Sea of Oman.

A total of 44 sailors are believed to have been transferred to Iran's port city of Jask in the southern province of Hormozgan.

The incident took place while Japan’s visiting prime minister was holding a meeting with Leader of the Islamic Revolution Ayatollah Seyed Ali Khamenei in Tehran.

Abe arrived in Tehran on Wednesday and became the first Japanese leader to visit Iran in more than 4 decades.