Less than 6 percent of Britons believe politicians understand them: Poll

TEHRAN, Jun 16 - A new poll carried out in Britain shows that lack of faith in the country’s political system is currently at its highest levels in decades, mainly due to the deep divisions among politicians on how they should deliver on the results of the referendum to leave the European Union. 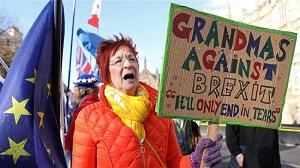 TEHRAN, Young Journalists Club (YJC) - Results of the survey by BritainThinks published in the Observer showed that less than six percent of the public in Britain believed their politicians understand them, while over 75 percent said that UK politics is not fit for purpose.

The results is yet another sign how a tight Brexit vote in June 2016 managed to further divide Britain, a country already beset by social and geographical disparity.

The poll, which covered 2,000 people, showed that more than 75 percent of people was of the opinion that divisions on Brexit will only get worse in the coming months despite pledges by senior politicians in the ruling Conservative Party that they will bring Britain out of the EU on its deadline of October 31.

Some 73 percent of the respondents to the survey said the political standoff over Brexit had made Britain an international laughing stock, insisting that current political situation had caused the country’s values to decline.

Commenting on the results of the study, a senior polling expert called them “shocking” as they showed how Britain had become more polarized and pessimistic than it has been for decades.

“I have been listening to people in focus groups since the late 1980s and I cannot recall a time when the national mood was more despairing,” said Deborah Mattinson while using words like “broken”, “sad”, “worried” and “angry” to designate the current mood of the British society.