The United States and Germany delivered a firm warning to Russia on Friday that it would face direct and painful economic sanctions if Ukrainian elections later this month are disrupted. 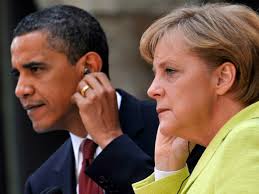 US President Barack Obama and German Chancellor Angela Merkel delivered the statement after talks at the White House appeared to bring the prospect of "sectoral" economic sanctions closer than ever before.

The joint declaration effectively amounted to a new standard for imposing "sectoral" sanctions on Russia's economy.

Previously, the Obama administration has said such measures would only come into force in response to a provocation on the order of Russia invading Ukraine.

"If, in fact, we see the disruptions and the destabilization continuing so severely that it impedes elections on May 25, we will not have a choice but to move forward with additional... severe sanctions," Obama said.

"If Russia continues on its current course, we have a range of tools at our disposal, including sanctions that would target certain sectors of the Russian economy."

Such measures, already being worked on by experts in the United States and Europe, would likely target economic activity including in the financial, energy and mining sectors that are vital to the Russian economy.

"The 25th of May is not all that far away. Should that not be possible to stabilize the situation further, sanctions will be unavoidable," Merkel said.

"It's very much up to the Russians which road we will embark on, but we are firmly resolved to continue to travel down that road."

Even though both sides now agree that sectoral sanctions may be necessary, the definition and exact targeting of those measures will be crucial and could be broad.

Europe's measures will be closely watched from the United States to see if they appease influential business interests at the expense of effectiveness.

But Merkel said later in a speech at the US Chamber of Commerce that she believed she could deliver German big business.

"The German business community, should we have sanctions, will abide by it," she said.

The talks at the White House took place as fresh instability and violence rocked eastern Ukraine and Moscow warned that Kiev must halt an operation against pro-Kremlin groups.
- Barrel of a gun -
===================
Obama also warned Russia over the fate of a group of Organization for Security and Cooperation in Europe (OSCE) observers, including four Germans, who have been captured by pro-Moscow militias in eastern Ukraine.

"They've been paraded in front of the media and forced to make statements at the barrel of a gun. It is disgraceful and it's inexcusable. Russia needs to work to secure their immediate release," Obama said.

The US president also showed some sensitivity to Merkel's task of bringing all members of the European Union along with sanctions -- at a time when the regional economy has barely recovered from the worst financial crisis in decades.

"Not every country is going to be in exactly the same place," Obama acknowledged.

"But what has been remarkable is the degree to which all countries agreed that Russia has violated international law, violated territorial integrity and sovereignty of a country in Europe, and I think there is unanimity that there has to be consequences for that."
AFP
Share to
Tags
Obama ، Merkel ، Putin ، economic sanctions
Your Comment