TEHRAN, Jun 29 -A US report says American officials claimed that the drone attacks on Saudi Arabia’s oil pipeline in May originated from Iraq, not Yemen. 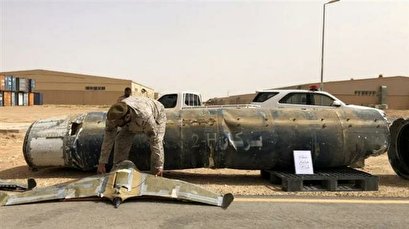 The report said that American officials came short of providing any further details or reasons for the assessment, other than the drone attacks being "more sophisticated than previous ones launched by Houthi forces in Yemen".

Yemeni forces have in the past two months launched an array of advanced retaliatory missile and drone attacks on vital Saudi facilities, including oil installations, airports and air defense batteries in response to incessant Saudi strikes on the country.

The specific drone attacks, singled out by US authorities, hit two Saudi oil pumping stations deep inside the oil-rich kingdom on May 14, leading to a temporary shutdown of the country's vital 1200 km long East-Weat oil pipeline.

The American assessment comes despite the attack being officially claimed by Yemen's Houthi Ansarullah movement, a claim confirmed by Saudi officials.

Baghdad has so far not received any conclusive evidence, according to the WSJ.

At a weekly news conference on Tuesday, Iraqi Prime Minister Adel Abdul Mahdi told reporters that Baghdad had been contacted on the matter by US officials.

The prime minister, however, rejected the claims, saying that Iraqi intelligence and military services monitor the country's airspace and that "there was no movement on that day on this subject".

"As far as we are concerned, we have no proof and we have no evidence in this matter," Mahdi added.

The report claimed that Washington's assessment comes as the US is growing increasingly wary of "Iran-allied militias" in Iraq, a common label used by Washington to identify forces operating as Iraq's Popular Mobilization Units (PMU).

The US has also blamed a series of recently unclaimed rocket attacks targeting US facilities in Iraq on "Iran-allied" elements, further pressuring Baghdad to counter its PMU-aligned resistance forces.

PMU forces, which are currently officially funded by the Iraqi government and integrated into the Iraqi military, played a major role in fighting against the foreign-backed terror groups and liberating the country from the Daesh terrorist group. The forces have, nonetheless, been targeted by American forces on numerous occasions.

Washington's pressure against Baghdad comes as Iraqi officials have voiced concern over American interference and troop presence in the country.

Earlier this week, Iraqi President Barham Salih said that Iraq will under no circumstances allow the US military to use its bases in Iraq for an act of aggression against neighboring Iran.

The drive to pressure Baghdad against Iraq's resistance forces comes as the US has been long seeking to counter the emergence of a united front of regional forces, usually known as the "Resistance Axis", which gradually spanned the region countering US and its allies' interventions in the Middle East.

The US has since imposed numerous sanctions against state and non-state actors in the region. Washington has also insisted on keeping its troops stationed in Syria and Iraq to "counter Iran", despite originally deploying them on the pretext of fighting Daesh.

The US has also recently ratcheted up its rhetoric against Iran, announcing additional troop deployments, including an aircraft carrier strike group, to the Persian Gulf region in order to counter an unspecified "threat" from Iran in early May.

Amid the increased tension and US military presence in the region, Iran shot down a multi-million dollar US spy drone last week after it violated its airspace on June 20.

The US and Saudi Arabia have been quick to blame Iran and its allies for the tensions and the oil tanker attacks despite failing to produce any conclusive evidence.

Further building up forces in the region, the US Air Force’s Central Command on Friday confirmed an additional deployment of an F-22 stealth fighter contingent in Qatar as measure of "defense".