TEHRAN, Jun 30 -The US Air Force has deployed its F-22 Raptor stealth jet fighters to its military base the Persian Gulf state of Qatar amid a continued show-of-force effort in the strategic region following Washington’s recent provocations against Tehran and Iran’s shot-down of an intruding US spy drone in the Strait of Hormuz. 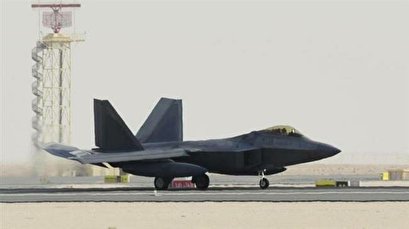 TEHRAN, Young Journalists Club (YJC) -The US Central Command (CENTCOM) announced on Friday that the warplanes have arrived in Qatar’s al-Udeid Air Base for the first time to “defend American forces and interests,” US-based news outlet Military.com reported without specifying the number of the deployed aircraft. It further noted that nearly a dozen F-22s are already based in the region.

Al-Udeid serves as one of US military’s most important air bases in the region with operations launched from there throughout the Middle East. The base plays host to nearly 11,000 American and US-led coalition forces and more than 100 operational war planes.

In the aftermath of the US-initiated Persian Gulf War in 1991, Washington and Doha signed a military cooperation pact after which the US regional air force moved to Qatar in 2003, evacuating the Prince Sultan air base in Saudi Arabia.

According to Qatari officials cited in press reports, nearly 80 percent of US-led aerial refueling in the region is being carried out from al-Udeid air base.

Costing about $150m apiece, the F-22 Raptor is a fifth-generation, single-seat, twin-engine fighter jet, designed primarily as an air superiority fighter. It also has ground attack and signal intelligence capabilities.

Lockheed Martin, the prime manufacturer, built most of the F-22's airframe and weapons systems and conducted final assembly, while Boeing provided the wings, fuselage, avionics integration, and training systems.

The F-22 jet fighters were previously stationed at al-Dhafra Air Base in nearby United Arab Emirates (UAE) and used in purported operations against foreign-backed Daesh (ISIL) terrorists across Iraq and Syria since 2014. However, they were returned to the US last fall and replace by F-15C Eagle war planes.

The development came after tensions between Washington and Tehran spiked last week after the shot down of a US navy RQ-4 Global Hawk surveillance drone by an Iranian anti-air missile battery on June 19, which followed false US allegations that blamed Iran – without verifiable evidence -- for attacking two commercial oil tankers in the Sea of Oman earlier in the month.

Following the drone shot-down, Iranian military officials announced that they had exercised restraint by not shooting down a P-8 Poseidon surveillance aircraft flying nearby in the region. CENTCOM officials, meanwhile, maintained that US spy planes routinely operate in the region along Iranian territorial waters.

Last month, the US Air Force deployed several nuclear-capable B-52 Stratofortress bombers as well as an aircraft carrier task force to the region in response to what the Pentagon claimed as a possible plan by Iran to attack American forces in the Persian Gulf.

Moreover, US Air Force's top officer also insisted last week that intelligence, surveillance and reconnaissance flights will continue despite Iran's shot down of the spy drone.

"Yes, we're continuing to fly," said Chief of Staff Gen. David Goldfein during a breakfast hosted by the Mitchell Institute in Washington, DC on Wednesday. "We continue to fly where we need to, when we need to be there and as we do in all scenarios."

This is while Iranian authorities have persistently maintained that while they are not looking for a confrontation with the US or any other state, the country will never shy away from defending its territorial rights and regional interests on its own turf.

Additionally, in efforts to circumvent illegitimate US-led sanction aimed at halting Iranian oil exports, Tehran has vowed to abandon some of its commitments under the multilateral nuclear agreement -- involving the US, the UK, China, France, Germany and Russia – which Washington abrogated by its unilateral withdrawal from the deal.