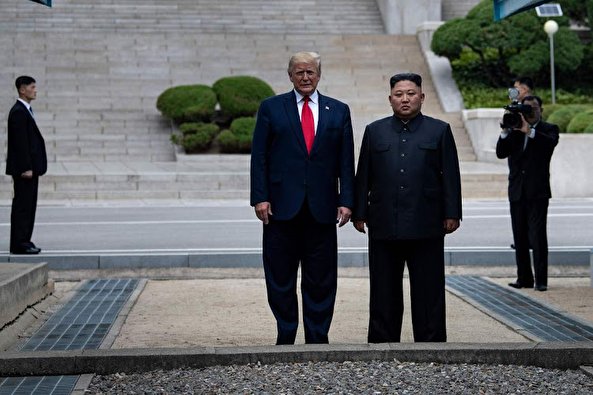 TEHRAN, Young Journalists Club (YJC) - Democratic presidential hopefuls and lawmakers launched a direct attack on Trump over his spur-of-the-moment decision to meet Kim at the Demilitarized Zone separating South Korea from the North on Sunday.

They also objected to Trump’s move in crossing the border into South Korea as the first ever American president.

A spokesman for leading Democratic candidate and former vice president Joe Biden, blasted Trump for “coddling” Kim “at the expense of American national security and interests.”

Senator Elizabeth Warren (D-Mass.), who enjoys the second strongest following among the aspirants, said the president was “squandering American influence on photo ops and exchanging love letters” with Kim.

Senator Bernie Sanders, almost next in popularity to Warren, said the move had “weakened the State Department.”

Keith Preston, director of Attackthesystem.com, said Democrats were looking to “weaponize” the meeting and use it to their own advantage.

“Foreign policy has simply become an issue that political parties are using to weaponize against each other,” he told Press TV on Monday.

“The Democratic Party politicians are simply trying to attack Donald Trump and it wouldn’t matter what he did,” the Virginia-based analyst argued.

Preston noted that it was always a positive development when two leaders decided to sit down and peacefully resolve their differences.

This is specially important for North Korea and the U, as they both came within inches of nuclear war over Washington’s objections to Pyongyang’s nuclear tests and ballistic missiles programs.

During the DMZ meeting, which was their third, Trump and Kim agreed to resume talks after the collapse of the last meeting in Vietnam earlier this year.

“It is interesting that the Democrats are attacking the peace process simply for the purpose of scoring some political points,” Preston said.

“That actually reflects the kind of divisions that go on in our society at the present time” he continued, adding that the Democratic response to Trump’s meeting was “just another episode of partisan politics shaping foreign policy.”