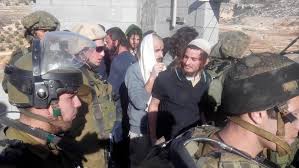 Calls are mounting for hardline Jewish settlers to be classified as terrorists after a spate of attacks on Palestinian property in the West Bank and Israel, and threats of violence towards Israeli soldiers.
Last week, the justice minister, Tzipi Livni, and the internal security minister, Yitzhak Aharonovitch, both argued that rightwing extremists should be classified as terrorists following attacks on soldiers at the hardline West Bank settlement of Yitzhar.
And on Friday, the Israeli prize laureate author Amos Oz described the hardline Jewish settlers that carry out so-called "price tag" attacks on Palestinians as neo-Nazis.
"Our neo-Nazi groups enjoy the support of numerous nationalist or even racist legislators, as well as rabbis who give them what is in my view pseudo-religious justification," the 75-year-old said at an event in Tel Aviv.
It is not the first time that politicians and public figures in Israel have called for the branding of rightwing settlers as terrorists, but recent events have coalesced into something of a perfect storm.
A spate of vandalism in Jerusalem and Galilee has seen rightwing groups target Christians ahead of the visit of Pope Francis, including a graffiti attack on the Vatican building where he is due to stay later this month.
Meanwhile, in the hardline settlement of Yitzhar, police arrested a woman for inciting violence towards the IDF, just weeks after Israeli soldiers were attacked when they attempted to dismantle a settler outpost.
It also coincides with the failure of the recent round of peace talks, with senior politicians and peace-talks negotiators in the US, Israel and Palestine attributing the breakdown to settlement activity, among other factors.
But in the hillside West Bank village of Asira al-Qibliya, which is just 300 metres from Yitzhar, Palestinian villagers see the recent backlash as a case of too little, too late.
"It is only words. We don't want words, we want deeds," said Bassem Salah, 50, a construction worker.
His neighbour Ibrahim Makhlouf, 52, a teacher, also dismissed the comments of Israeli politicians, given the support that the Israeli state provides to settlements in the West Bank.
"They say it is a minority, but it is a minority supported by both the government and the army – they receive free water, free electricity, the government spend millions of dollars on them. Who are they trying to kid?" said Makhlouf.
His two-storey home is the closest in the village to Yitzhar, and last year a French NGO installed a metal grate across one side of the building after his windows were broken regularly by stone-throwing radical Zionists.
He says that the situation has improved since 2012, when villagers were given cameras to document the attacks. In the past, settlers would tell the IDF that they were provoked, he said, but faced with video evidence the soldiers have been forced to act.
But the father-of-four still believes that settlements such as Yitzhar remain the biggest barrier to peace between Israel and Palestine.
"As long as there is a settlement here I don't see a future. This settlement needs to be evacuated. We don't want Palestine from the river to the sea, we just want them to leave our home town," he said.
"Abu Mazen [Palestinian President Mahmoud Abbas] should stop security co-operation, he should stop negotiations. Before the [1994] Oslo Accords the settlement was 9km away, now it is 300 metres. What have we received from the peace process? More settlements."
"There is no compromise," added Salah, "it is us or them."
A spokesperson for Yitzhar did not reply to requests for comment.
Guardian
Share to
Tags
Israel ، neo Nazis ، Jewish settlers
Your Comment

Zionist rabbi: The only issue in normalization between Riyadh and Tel Aviv is "time"

Raeisi travels to Oman on Monday

Doubling the price of Iranian subsidized goods in the Afghan market

US official: We are not seeking regime change in Syria

Biden's dramatic decline in popularity, even among all his parties

Saudi source: The transfer of power in Saudi Arabia is imminent

Saudi Deputy Defense Minister meets with US envoy to Yemen

Expansion of Kabul-Abu Dhabi relations; The focus of a meeting between a senior Taliban official and the President of the UAE

The Zionist regime uses the Palestinian girl as a human shield

Saudi source: The transfer of power in Saudi Arabia is imminent

Saudi Deputy Defense Minister meets with US envoy to Yemen

Lapid and unilateral efforts to save the Tel Aviv cabinet