TEHRAN, Jul 3 - Yemeni army forces, supported by allied fighters from the Popular Committees, have intercepted and targeted an unmanned aerial vehicle belonging to the Saudi-led military coalition as it was flying in the skies over Saudi Arabia’s southwestern border region of Jizan. 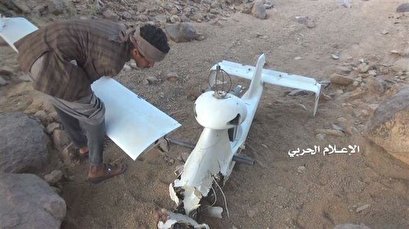 TEHRAN, Young Journalists Club (YJC) - An unnamed source in the Yemeni air defense forces told the media bureau of the Houthi Ansarullah movement that Yemeni forces and their allies shot down the drone while on a reconnaissance mission east of the mountainous Jabal al-Doud district of the region, located 967 kilometers southwest of the capital Riyadh, on Wednesday afternoon.

The development came less than a week after Yemeni air defense forces and their allies intercepted a spy drone launched by the Saudi-led military alliance in the kingdom's same region.

On June 23, Yemeni air defense forces and fighters from Popular Committees shot down a drone belonging to the Saudi-led coalition fighting in Yemen over al-Sadis area of Saudi Arabia’s southern border region of Najran.

A day earlier, Yemeni air defense forces and their allies had downed a drone as it was flying over al-Mazraq area in the Harad district of Yemen’s northwestern province of Hajjah, located approximately 130 kilometers northwest of Sana’a.

Yemeni army forces and fighters from Popular Committees shot down a spy drone of the Saudi-led military coalition in the skies over Hudaydah on June 21.

Saudi Arabia and a number of its regional allies launched a devastating campaign against Yemen in March 2015, with the goal of bringing the government of Yemen's former president Abd Rabbuh Mansur Hadi back to power and crushing the Ansarullah movement.