TEHRAN, Jul 5 - An Italian humanitarian group says its boat rescued 54 migrants north of Libya, where an airstrike on a detention center killed at least 44 migrants this week. 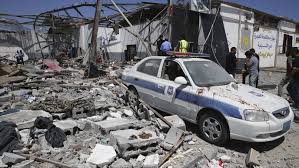 TEHRAN, Young Journalists Club (YJC) - Beppe Caccia, a coordinator for Mediterranea Saving Humans, said the crew of the Alex performed the rescue Thursday after Italian authorities told them to stand down and let the Libyan coast guard handle it.

Groups that operate rescue ships on the Mediterranean Sea say neither the European Union nor the United Nations consider Libya a safe port.

The airstrike on a detention center near Tripoli killed at least 44 other migrants a day earlier.

Caccia said: "We're happy to have pulled them out of the hell that is Libya."