Hundreds of sharks snarled by plastic in the world's oceans, scientists warn

TEHRAN, Jul 6 - New research suggest previous studies have underestimated the number of sharks and rays entangled in plastic. The problem is likely much worse than scientists realized. 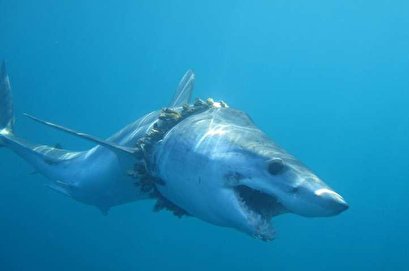 TEHRAN, Young Journalists Club (YJC) -Researchers at the University of Exeter scanned the scientific literature, as well as Twitter, for reports of sharks and rays found tangled in plastic debris. The research team uncovered evidence of 1,000 entangled individuals, but scientists suggest the true number is surely much greater.

"Our study was the first to use Twitter to gather such data, and our results from the social media site revealed entanglements of species -- and in places -- not recorded in the academic papers," Brendan Godley, professor of marine biology at Exeter, said in a news release.

The majority of tangled individuals became twisted in lost or discarded fishing gear.

"One example in the study is a shortfin mako shark with fishing rope wrapped tightly around it," said Kristian Parton, researcher at Exeter's Center for Ecology and Conservation. "The shark had clearly continued growing after becoming entangled, so the rope -- which was covered in barnacles -- had dug into its skin and damaged its spine."

Though entanglement isn't a major threat to sharks and rays, scientists claim it's important to understand the full range of threats facing vulnerable species.

"Additionally, there's a real animal welfare issue because entanglements can cause pain, suffering and even death," Parton said.

The problem of entanglement has been overshadowed by the much larger problem of commercial fishing, specifically the problem of bycatch -- accidentally catching sharks and rays while fishing for other species.

Among the academic literature, scientists found evidence of entanglements involving 557 sharks and rays, comprising 34 different species, in the Atlantic, Pacific and Indian. Spotted dogfish, spotted ratfish and spiny dogfish were the most commonly reported entangled species in scientific papers.

Analysis of the compiled data suggests sharks and rays in the open ocean, especially species that migrate long distances, are especially vulnerable to entanglement. The evidence also suggests species with unusual sharp or jagged features, like manta rays, basking sharks and sawfish, are at greater risk of entanglement.