TEHRAN, Jul 7 - Sudan's pro-democracy movement on Saturday abandoned plans for marches next week, after it reached a power-sharing deal with the ruling military council following a weekslong standoff over the role of the army in the transition. 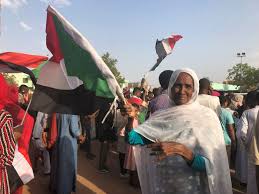 TEHRAN, Young Journalists Club (YJC) - Both sides agreed on Friday to form a joint military and civilian sovereign council to lead the country during a transition period of three years and three months, sparking street celebrations in the capital of Khartoum and other cities across the county.

Rebel groups, however, slammed the long-waited deal as a "betrayal of the revolution" that led to the military ouster of autocratic President al-Bashir in April amid nationwide protests against his nearly three decades of rule.

Gen. Abdel-Fattah Burhan, head of the military council, vowed Saturday to "protect and implement" the deal. He said the military council would work closely with the Forces for Declaration of Freedom and Change, which represents the protesters in negotiations, and other political forces "to build and protect" the country and to "achieve peace and justice."

The FDFC abandoned previously announced marches next week on the 40-days anniversary of a deadly beak-up of their protest sit-in outside the military headquarters on June 3.

Earlier this week, the FDFC had called for marches in Khartoum and elsewhere on July 13 and for a general strike and civil disobedience the following day.

The new schedule included meetings, workshops and campaigns across the country. The FDFC said it was "an initial part of a comprehensive action plan" aimed at rooting out members of the al-Bashir regime.

Sudanese rebel groups criticized the power-sharing deal, which came after intensive efforts by the African Union and Ethiopia.