Macron, Putin say Iran deal vital to security, pledge to step up efforts to save JCPOA

TEHRAN, Jul 18 - France and Russia’s presidents, Emmanuel Macron and Vladimir Putin, have underlined the pivotal role of the 2015 nuclear deal between Iran and world powers in ensuring regional security. 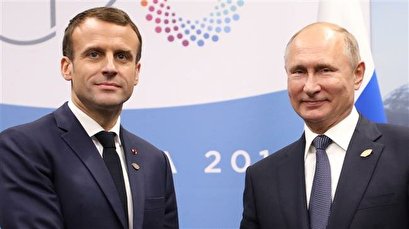 "Both sides underlined that the [nuclear deal] is the most important factor for ensuring security in the Middle East and maintaining the nuclear non-proliferation regime," Reuters cited a statement by the Kremlin detailing the conversation.

The agreement was signed in Vienna that year between the Islamic Republic and the P5+1 group of states comprising the United States, the UK, France, Russia, China, plus Germany. The JCPOA lifted nuclear-related sanctions against Iran in return for the country’s voluntarily changing some aspects of its nuclear energy program.

The US unilaterally left the JCPOA last year in defiance of international criticism and although the deal has been ratified as a resolution by the United Nations Security Council. Washington also returned its anti-Iran sanctions in a move condemned by the Islamic Republic as “economic terrorism.”

The Kremlin said the French and Russian heads of state attached “great importance” to preservation of the deal and pledged to increase their efforts to enable continued existence of the accord.

The two leaders addressed the aftermath of the US departure from the deal and its implementation by the remaining signatories, it added.

Separately on Thursday, Russian Foreign Minister Sergei Lavrov urged Europe to be clearer in its position on the Iran nuclear deal.

Lavrov, who was speaking in Germany at talks with Foreign Minister Heiko Maas, also said Russia had growing concerns that the US was backing away from nuclear arms control treaties.

Following the US withdrawal from the JCPOA, the European signatories to the deal pledged to keep the deal alive.

However, the Islamic Republic has been critical of the Europeans for bowing to US pressures and sanctions and has sternly warned against cosmetic action by Europe, reminding on many occasions that the deal’s other partners should live up to their contractual obligations too.

In May, Iran initiated a set of countermeasures to retaliate against the US measures and prompt the other parties to do so. The response has seen the country surpassing the 3.67-percent level on its uranium enrichment activities among other things.

Tehran has, however, noted that the measures are reversible once the other JCPOA signatories fully implement their respective obligations.