US ‘a militarized society whose lifeblood is war’: Analyst

TEHRAN, Jul 20 -The United States is a "militarized society" whose "lifeblood" is war, says a political analyst in California, reacting to a major military exercise that the US has launched off the coasts of Australia in the Pacific region and seems to be part of America’s policy shift towards confronting China’s growing influence in the region. 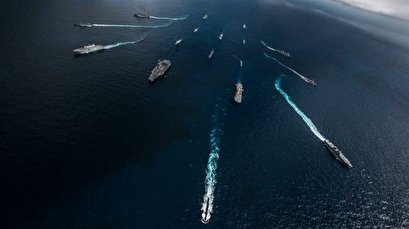 TEHRAN, Young Journalists Club (YJC) - Dennis Etler, a former professor of Anthropology at Cabrillo College in Aptos, California, made the comment in an interview with Press TV on Thursday.
Etler said after the collapse of the Soviet Union (USSR) in the 1990s, China began to emerge as a new force in the East, prompting the US to wage war against the vast Asian country to gain its position.
“In the East a new force began to emerge. Out of the ruins of nearly two centuries of decline, fragmentation and conquest arose a new colossus, the People's Republic of China,” the political analyst said.
“The US gained its position by waging war. It retains its position by waging war. Its economy is a war economy. Over 60% of its discretionary spending is spent on the military. War is its lifeblood. And a militarized society needs an enemy to sustain itself. First the USSR, then Muslims, and now China,” he added.
Etler attributed the China’s rise to “dint of hard work” rather than military conquest, stressing that the country “marshaled its resources and literally pulled itself up by its bootstraps by planning and investment.”
The analyst said China does not want to squander what it has achieved by engaging in military adventurism but its bitter history mandates that it will defend its dignity and sovereignty at all costs.
Etler dismissed US talks about freedom of navigation and said the US naval exercises in the Pacific meant to force the world to “kowtow to its military hegemony.”
“The current naval exercises in the Pacific are an expression of US command and control of the Indo-Pacific region. It is merely flexing its muscles and is meant to intimidate its rivals, it has nothing to do with regional security or rule of law,” he said. “In truth, it works against those goals and is a last ditch attempt to hold on to its fading Empire."
Under Donald Trump’s presidency, the US has pulled out some of its forces and equipment from the Middle East and deployed them in the Pacific, where the US military presence had been mostly limited to bases in countries neighboring the South China Sea.
The US and several of its allies, including Australia, have stepped up their military patrols and exercises in the South China Sea, over most of which China claims sovereignty.
The US Navy has been sending warships to the region in order to protect what it refers to as “freedom of navigation” operations in the disputed sea, which is also claimed by the Philippines, Vietnam and others and acts as gateway to trillions of dollars in maritime trade each year.
China has repeatedly warned the US to roll back its growing presence and stop its “provocative” patrols that near Chinese islands in the sea.
Source: Press TV