TEHRAN, Jul 21 - If the collapse of West Antarctica's ice was a certainty, what could be done to save the cultural heritage and economies along the world's coast? 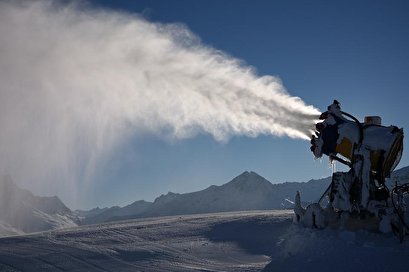 TEHRAN, Young Journalists Club (YJC) -In a paper published this week in the journal Science Advances, scientists in Germany and the United States considered a bold plan to pump millions of gallons of seawater to a system of snow cannons installed across West Antarctica.

It's a drastic measure, one that would have considerable environmental impacts on a still mostly pristine corner of the globe.

"The fundamental trade-off is whether we as humanity want to sacrifice Antarctica to safe the currently inhabited coastal regions and the cultural heritage that we have built and are building on our shores," Anders Levermann, physicist at the Potsdam Institute for Climate Impact Research in Germany, said in a news release. "It is about global metropolises, from New York to Shanghai, which in the long term will be below sea level if nothing is done."

Several of West Antarctica's glaciers are already melting rapidly and nearly a quarter of its ice is unstable. That instability, one new study predicted, could ensure the ice sheet eventually collapses, even if global warming is controlled.

If scientists determine the collapse of the West Antarctic ice sheet is inevitable, world governments will have difficult decisions to make about how to allocate resources in order to best protect coastal infrastructure and cultural heritage.

"We investigated what could stop a potential collapse in our simulations and increased the snowfall in the destabilized region far beyond observations," Postdam researcher Johannes Feldmann said. "In fact, we find that an awful lot of snow can indeed push the ice sheet back towards a stable regime and stop the instability. In practice, this could be realized by an enormous redisposition of water masses -- pumped out of the ocean and snowed onto the ice sheet at a rate of several hundred billion tons per year over a few decades."

Building and running a system of water pumps, desalination stations and snow cannons would require lots of energy. The construction of such a massive system would also be environmentally disruptive. But researchers suggest world governments, and the public, must start grappling with hard choices soon.

"The apparent absurdity of the endeavor to let it snow in Antarctica to stop an ice instability reflects the breath-taking dimension of the sea-level problem," said Levermann. "Yet as scientists we feel it is our duty to inform society about each and every potential option to counter the problems ahead. As unbelievable as it might seem: In order to prevent an unprecedented risk, humankind might have to make an unprecedented effort, too."