Tehran, YJC. Archbishop Gregorios says some media are trying to show Syrians as favoring terrorist groups against the government. 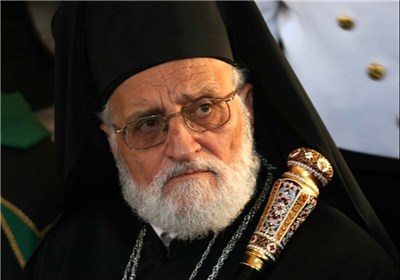 Archbishop of the Roman Catholic Christians in the Orient Patrick Gregorios III in interview with Tasnim said "World media show things as the favorites of and as the demands made by the Syrian people which are not truthful. That is a big media joke and a lie where the press try to show the people of Syria as favoring the murderous groups against the Syrian government.”

He stated "The Syrian people’s democracy is little covered by the world media while we are trying to bring the Syrian people a fun atmosphere, vast agriculture, and investment in schools and proper healthcare. The reality about Syria is that it is a modern-day example of democracy. I do not understand the way Syria is treated, since the life of the Syrian people is a comprehensive example of living in peace with people from different convictions.”

Gregorios further said "We have big problems and big danger in Syria today. Right now these dangers are covered by free press and peace-loving groups which have realized the truth. Such media have to get up and judge the press around the world which try to introduce the Syrian government as the axis of violence and bloodshed. In the past few years blood-shedding foreign forces have been dispatched to Syria from abroad. They have done much crime against the country. These groups resort to churches and mosques for their lives, using these places as safe havens to save their lives.”