"All these years I have had many offers to play outside Iran. I did not accept those because it has been my priority to continue my career in the Iranian cinema,” wrote the much loved Iranian actress Leila Hatami.

Her remarks followed serious controversy by fans of Islamic lifestyle inside Iran which concerned Hatami’s act of shaking hands with and kissing the Cannes Film Festival President Gilles Jacob a few days earlier on the Cannes red carpet.

She adds "As I have attended international events in these years, both as the actor in a film from the Iranian motion pictures which may have made it to the festival to represent Iran to others, and as a viewer who has been invited to festivals, which I would attend merely as an independent person, I have tried to observe the principals for this very clear reason that observing such rules is a requirement to work in Iran’s motion pictures.”

Leila Hatami further said "This time also I had some correspondence with the festival managers in which I explained all the points in detail, asking them for cooperation. That is why they knew of the principles in the inauguration and on other occasions; so they would cooperate and there would be no problem.”

"But as for Mr. Gilles Jacob who, with near 90 years of age, is having his last year in the festival, I have to explain that due to elderliness and not remembering all the emphases, which is a feature of such age, he forgot the principles so mentioned. My precautionary act in shaking hands with him also failed. Certainly he meant for me an old grandfather who was also the host,” she states in her note.

Hatami said "Although I am rather embarrassed to utter the explanation, maybe for those who couldn’t realize my inevitable situation I had to attend to some of the details. In the meantime I am so sorry for what happened, and so if I have hurt anybody; since I was raised by a father whose care for the Iranian religion and nationality is known to all.” 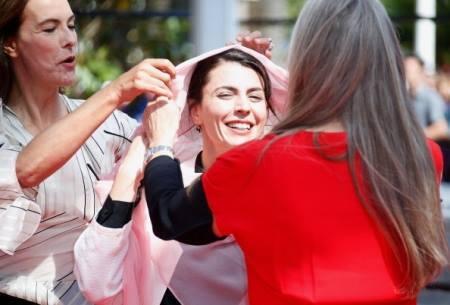