TEHRAN, Jul 24 Technicians in Iran Air (Homa) have managed to repair an old Airbus in a matter of a single day, changing the engine of the aircraft with one fully serviced and refitted inside Iran and allowing it to resume flights amid a busy travel season. 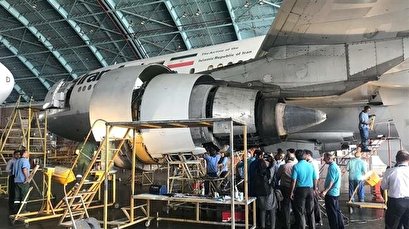 TEHRAN, Young Journalists Club (YJC) -Homa’s senior repair technician Rahim Baghban said on Wednesday that the 23-year old Airbus A300-600 would resume its long-haul flights later in the day just hours after malfunctions were spotted in its engine.

It comes as Homa jetliners are currently busy carrying tens of thousands of Iranian pilgrims to Saudi Arabia where the annual Hajj ceremonies are being held.

“Normally, engine change takes at least three days but given that all Homa planes are currently assigned to carrying the pilgrims, an early and urgent service of this aircraft became necessary,” Baghban told the official IRNA agency.

The official added that an overhauled engine was installed on the plane overnight allowing it to return to service in less than a day.

The repaired A300-600 Airbus is one of four such planes owned by Homa. It has finished seven journeys to Saudi Arabia since Hajj flights began earlier this month.

The quick maintenance operation comes as Iran is facing huge problems keeping its fleet of aircraft running amid sanctions imposed by the United States that have restricted the country’s ability for both buying new aircraft or placing orders for parts that are needed in maintenance services.

Baghban said the engine installed on the A300-600 had been fully overhauled and assembled by Homa engineers despite “sanctions and the scarcity of spare parts”.