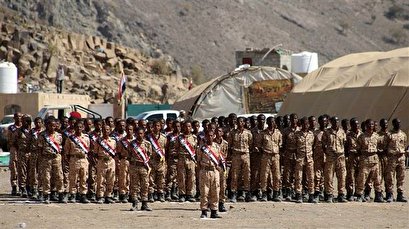 TEHRAN, Young Journalists Club (YJC) - The media bureau of the Houthi Ansarullah movement announced in a statement that Yemeni missile defense units fired five domestically-manufactured Zelzal-1 (Earthquake-1) missiles and artillery rounds at positions of Saudi mercenaries in al-Sadis area of the region, located 844 kilometers (524 miles) south of the Saudi capital Riyadh, on Tuesday afternoon.
The statement added that the missiles hit the designated targets with great precision, leaving a number of Saudi-paid militiamen killed and injured.
Earlier in the day, scores of Saudi mercenaries were killed and injured when Yemeni troopers and fighters from allied Popular Committees struck their positions in Moraba'a al-Shaja'a area of the same Saudi region.
Separately, Yemeni forces and their allies launched a barrage of artillery rounds at the strongholds of Saudi mercenaries in the Qa'atabah district of the southern Yemeni province of Dhale, leaving a number of the Riyadh-backed militiamen dead and injured.
Several Saudi mercenaries were also killed and wounded when a bomb explosion struck them in al-Jarrah area of Yemen's southern province of Ta'izz.
Saudi Arabia and a number of its regional allies launched a devastating campaign against Yemen in March 2015, with the goal of bringing the government of Hadi back to power and crushing Ansarullah movement.
The US-based Armed Conflict Location and Event Data Project (ACLED), a nonprofit conflict-research organization, estimates that the Saudi-led war has claimed the lives of over 60,000 Yemenis since January 2016.
The war has also taken a heavy toll on the country’s infrastructure, destroying hospitals, schools, and factories. The UN says over 24 million Yemenis are in dire need of humanitarian aid, including 10 million suffering from extreme levels of hunger.
Source: Press TV