Rouhani blasts US for imposing sanctions on Zarif 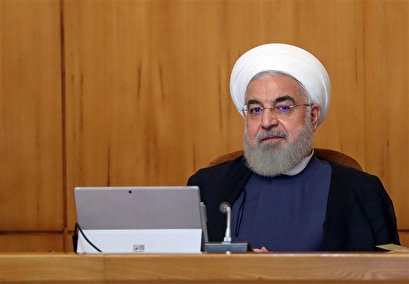 TEHRAN, Young Journalists Club (YJC) - In remarks during a Thursday trip to the northwestern province of East Azarbaijan, Rouhani lashed out at the US government for the paradoxical policy of expressing readiness for talks with Iran and at the same time imposing sanction on its top diplomat.

He said the US move to blacklist Foreign Minister Zarif reveals that “our enemies are so frustrated that they have even lost the opportunity for exercising intellect and wisdom.”

The president also reminded the US that the ministry of foreign affairs of a country is the only channel for any negotiation with that government.

“The fact is that a government (US) that proclaims to be a mighty government and a global superpower is afraid of our foreign minister’s interviews. It is crystal clear that all pillars of the White House are shaken by the remarks and logic of a scholar, dedicated diplomat, and knowledgeable person,” Rouhani said.

“Dr. Zarif gives an interview in New York, and they (US leaders) express their anger and concerns for weeks and months. They say Iran’s foreign minister comes here (to the US), deviates our public opinion, and expresses the realities,” the president stated.

Rouhani further mocked the US self-proclaimed support for freedom of speech, saying the center of US power is shaken by the logic of a powerful Iranian scholar, namely Zarif.

In a “very childish manner”, the US voices readiness for negotiations on the one hand, and imposes sanction on Iran’s foreign minister on the other hand, Rouhani deplored.