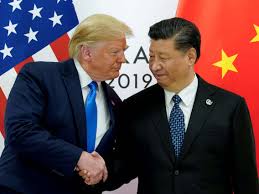 Cohn – who quit his role as director of the National Economic Council last year – claimed Trump had even helped Beijing by providing “a very convenient excuse” for China to slow the breaks on its overheated economy.

“I think the Chinese economy was going to slow down with or without a trade war,” he said.

The Chinese government was able to control its economy as desired, despite tariffs, by changing the availability of credit, he added.

However, he said tariffs imposed on the US by Beijing were have a “dramatic impact” on American manufacturing and damaging job creation in the sector.

“We are an 80 per cent service economy,” he said. “The service side of the economy is doing very well because, guess what, it’s not being tariffed.”

The Trump administration slapped 25 per cent tariffs on $250bn (£206bn) worth of Chinese imports in April last year, before China retaliated by targeting $110bn in hiked tariffs on US products later in 2018.