'Fairytale' win for first British jockey to race in hijab

TEHRAN, Aug 01 - A teenager made history as the first British jockey to compete in a major event wearing a hijab, winning a “fairytale” victory at the famed Goodwood racecourse. 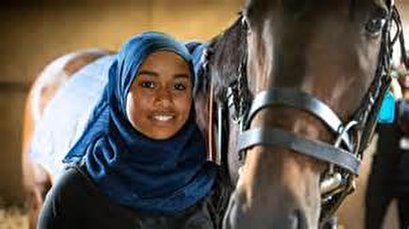 TEHRAN, Young Journalists Club (YJC) - Khadijah Mellah beamed and shared a high-five with another rider after crossing the finish line on her horse Haverland ahead of 11 other female jockeys.
The 18-year-old from a deprived south London neighborhood had never sat on a racehorse until April and Goodwood described her victory in the Magnolia Cup, a charity race for non-professional jockeys, as a “fairytale win.”
Mellah, who competed against riders, including former Olympic cyclist Victoria Pendleton and presenter Vogue Williams, said before the race it was “crazy” that she was the first female Muslim jockey in British competitive horse racing.
Source: agencies