TEHRAN, Aug 02 - Moscow is set to deploy new weapons as Russia and the US officially pull out of the Cold War-era Intermediate-Range Nuclear Forces treaty on Friday, analysts say, raising the spectre of another arms race. 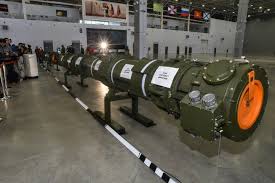 TEHRAN, Young Journalists Club (YJC) - Washington and Moscow have long accused each other of violating the 1987 treaty and both sides have been planning the mutual withdrawal for many months.

Russian President Vladimir Putin suspended participation in the agreement, which limits the use of medium-range missiles, in March after Donald Trump's White House said it was ditching the deal.

"Now that the treaty is over, we will see the development and deployment of new weapons," military analyst Pavel Felgenhauer told AFP, adding: "Russia is already ready".

Putin first discussed the new weapons late last year in front of high-ranking officers and he gave further details in February -- just as the US launched the procedure to ditch the INF deal.

In addition to the creation of a medium-range land-based missile, Moscow plans to develop a land-based version of the Kalibr missiles that have already successfully been used by the navy and tested in Syria.

But Russia has financial constraints.

It has struggled to emerge from a 2014 economic crisis caused by sanctions and a fall in oil prices. Its military budget is a tenth of the size of Washington's.

Putin has specified that the new missiles must be developed "without increasing the defense budget". Observers say this reluctance to boost spending may be a hangover from the Soviet Union, which collapsed partly under the burden of its huge military spending.