Western gorillas use their teeth to crack open, eat nuts 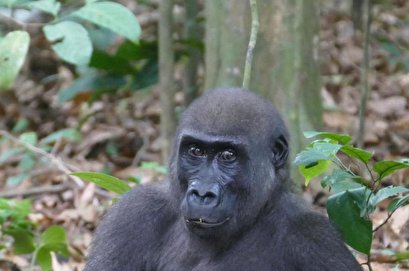 While the force of a gorilla's chomp is powerful, their teeth aren't well-suited for eating nuts. When cracking open a nut's hard shell, the gorillas risk damaging the high crests on their molar teeth.

"I was amazed when we first observed the nut eating by the gorillas," Martha Robbins, researcher at the Max Planck Institute for Evolutionary Anthropology in Germany, said in a news release. "We can not only see it, but also hear it, as the shell gives way to the incredible strength of their bite. Gorillas obviously have large, powerful jaws, but we did not expect to see this because their teeth are not well-suited to such behavior."

Researchers observed western gorillas in Gabon eating the nuts of the Coula edulis tree species, which taste similar to hazelnuts. The tree species is sometimes referred to as the Gabon walnut or African walnut, but it is not closely related to the walnut.

Nuts grow on the evergreen trees for three months every year. Scientists observed western gorillas in Loango National Park focusing most of their attention on chomping the energy-dense nuts during the three-month window.

The great apes don't use tools to break the nuts open. Instead, they rely on the brute force of their bite and the sharp ridge of their teeth to crack them. The new research suggests the ape's teeth are stronger than previously assumed.

Authors of the new study suggest the dietary habit is potentially cultural, a behavior learned by watching those around them, and thus, unique to particular group of gorillas.

"The fact that this nut eating is observed in Loango but not in other forests in central Africa where the nut occurs stresses the importance of studying and conserving gorillas throughout the habitat where they are found," said Robbins.