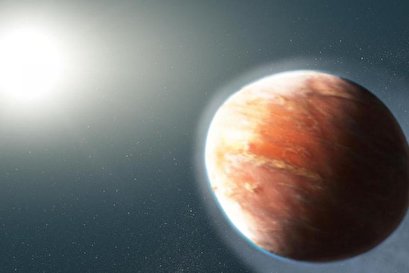 TEHRAN, Young Journalists Club (YJC) -WASP-121b is a planet of firsts. During an earlier survey, the hot Jupiter became the first exoplanet found with water in its stratosphere. The latest investigation, which revealed the presence of hot metal gases, was made possible by NASA's Hubble Space Telescope.

Researchers described their latest discovery Thursday in the Astronomical Journal.

"This planet is a prototype for ultra-hot Jupiters. These planets are so heavily irradiated by their host stars, they're almost like stars themselves," Drake Deming, professor of astronomy at the University of Maryland, said in a news release. "The planet is being evaporated by its host star to the point that we can see metal atoms escaping the upper atmosphere where they can interact with the planet's magnetic field. This presents an opportunity to observe and understand some very interesting physics."

Typically, hot Jupiters are cool enough to condense heavier elements, which keeps them stabilized in their atmosphere. But WASP-121b isn't your average hot Jupiter. It's extremely hot, with an upper atmosphere boasting temperatures of 4,600 degrees Fahrenheit.

What's not being quickly evaporated by the heat of the exoplanet's host star is being pulled apart by the WASP-121's gravity. The gravitational tug of its host star explains WASP-121b's football-like shape.

"Heavy metals have been seen in other hot Jupiters before, but only in the lower atmosphere," said lead researcher David Sing, an astronomer at Johns Hopkins University. "With WASP-121b, we see magnesium and iron gas so far away from the planet that they're not gravitationally bound. The heavy metals are escaping partly because the planet is so big and puffy that its gravity is relatively weak. This is a planet being actively stripped of its atmosphere."

Scientists used Hubble's Space Telescope Imaging Spectrograph to analyze the light from WASP-121 as it passed through the atmosphere of WASP-121b. The data showed the system's ultra-hot Jupiter is rapidly shedding its atmosphere.

"The hot Jupiters are mostly made of hydrogen, and Hubble is very sensitive to hydrogen, so we know these planets can lose the gas relatively easily," Sing said. "But in the case of WASP-121b, the hydrogen and helium gas is out-flowing, almost like a river, and is dragging these metals with them. It's a very efficient mechanism for mass loss."