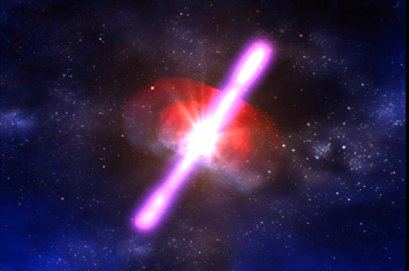 In recent years, scientists have succeeded in tracing the powerful bursts to their origins. Long gamma-ray bursts are produced by the death and collapse of massive stars, while shorter gamma-ray bursts emanate from neutron star mergers.

Despite the revelations, astronomers remain puzzled as to how exactly gamma-ray burst radiation is produced. But as a new study recently revealed, clues are emerging.

The ultra-high energy TeV photons, recorded after the gamma-ray burst's peak, during the afterglow phase, were 10 times more energetic than the previous record for most intense post-burst photon emission.

By combining the photon observations with observations of lower energy X-rays by the Neil Gehrels Swift satellite, scientists were able to identify the mechanism behind the gamma-ray burst. Scientists determined the burst's radiation was produced by a relativistic jet moving at the speed of light in the direction of Earth.

More specifically, the gamma-ray burst and high-energy photons were produced by what's known as the "inverse Compton mechanism," whereby extremely fast moving electrons -- accelerated to high speeds by the relativistic jet -- collide with slower-moving photons. The collision bumps up the energies of the photons.

Scientists detailed their latest discovery this week in the Astrophysical Journal Letters.

"MAGIC has found the Rosetta stone of gamma-ray bursts," Tsvi Piran, an astrophysicist and professor at the Hebrew University of Jerusalem, said in a news release. "This unique detection enables us for the first time to discriminate between different emission models and discover what are the exact conditions in the explosion. We can also understand now why such radiation wasn't observed in the past."

As scientists detect more and more gamma-ray bursts, each time, using an array of telescopes to interpret the burst and its aftermath, they expect to gain further insights into the mechanisms behind the cosmic phenomenon.