Protest held in violence-plagued US city to end murders

TEHRAN, Jul 7 - Anti-gun violence activists have rallied in Baltimore, Maryland, after US president Donald Trump's disparaging comments about the city, which has one of the highest murder rates in the US. 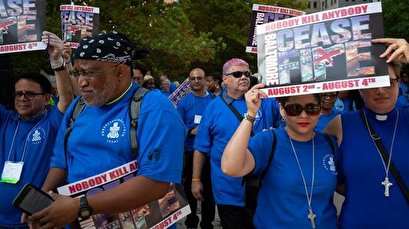 TEHRAN, Young Journalists Club (YJC) - Demonstrators marched through the city’s downtown on Friday as part of an initiative called “Ceasefire” to remember victims of gun violence.
“Bestow your healing touch upon this city,” the crowd of about 100 said in unison, praying in front of a park near where 40-year old, Levar Bailey was shot dead in November 2017.
They held up signs saying: “Nobody kill anybody. Baltimore Ceasefire.”
The Ceasefire movement was launched in 2017 and holds rallies every three months with the stated goal of creating awareness, strengthening community bonds and ending murder.
“So many have died, and so little has been said,” Bob Hoch, of First and Franklin Presbyterian Church in Baltimore, says through a megaphone on Park Avenue.
Activists cite many reasons for the violence, including poverty, racism, family and community breakdown, frustration, and the easy availability of guns.
Although more than 300 people have been killed each year in Baltimore since 2015, activists say they are making a difference.
The protest comes after Trump’s recent comments attacking Baltimore over its crime and other problems, sparking accusations of racism.
Activists say Trump’s recent comments disparaging Baltimore could apply to other US cities suffering from rampant gun violence.
J. Herbert Nelson, who heads the Presbyterian Church USA, said Baltimore is not unique in a country where firearms killed nearly 40,000 people in 2017.
“This entire country, actually, is the very word that he called Baltimore because this is the culture in which we live throughout the United States of America, and I’m convinced if this continues as it is, no one is going to be safe,” Nelson said.
Source: Press TV