TEHRAN, Jul 7 - Prominent hawks in the administration of US President Donald Trump, as well as a significant segment of American voters, are opposed to normalizing US ties with Iran and North Korea, an American journalist and political commentator says. 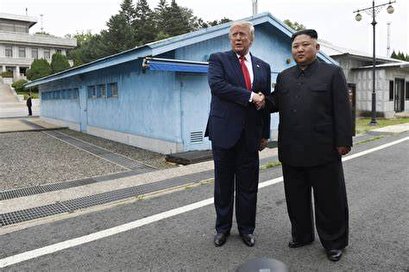 TEHRAN, Young Journalists Club (YJC) - “The fact that this [normalization of ties] has not happened 60 some odd years after the war on the Korean peninsula between the US and North Korea and China and others, indicates that there are some folks here who have a very strong interest in not allowing this to happen,” said Don DeBar, a radio host in New York.
And “given the way the US has treated Iran since 1953 and 1979, there’s a very powerful constituency here that does not want to see relations normalized with Iran either,” DeBar told Press TV in a phone interview on Saturday.
Trump on Friday played down what appeared to be North Korea’s third missile launch in just over week, saying they were short-range and “very standard” and would not affect his willingness to negotiate with Pyongyang.
Trump dismissed the launches by Pyongyang as “very standard,” and said North Korean leader Kim Jong-un will not want to "disappoint" him because he has "too much to lose."
"There may be a United Nations violation, but Chairman Kim does not want to disappoint me with a violation of trust, there is far too much for North Korea to gain," Trump told reporters at the White House.
North Korea fired two short-range ballistic missiles early on Wednesday, only days after it launched two similar missiles on July 25.
Pyongyang’s called the tests a “solemn warning” to its southern neighbors, South Korea and Japan, which host US military bases and conduct regular war games.
North Korea is reportedly furious over joint US-South Korean military exercises scheduled to start next week, and some independent observers say the launches are intended to increase pressure on Washington.
A summit between Trump and Kim in Vietnam in February collapsed after the two sides failed to reconcile differences between Washington’s demands for Pyongyang’s complete denuclearization and North Korean demands for complete sanctions relief.
Source: Press TV