TEHRAN, Jul 7 - NASA's Transiting Exoplanet Survey Satellite (TESS) is halfway through its two-year primary mission and has completed its survey of the southern sky in its search for extrasolar planets. 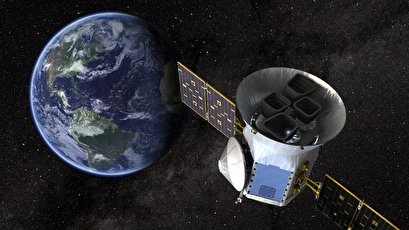 TEHRAN, Young Journalists Club (YJC) -NASA's Transiting Exoplanet Survey Satellite (TESS) is halfway through its two-year primary mission and has completed its survey of the southern sky in its search for extrasolar planets. According to the space agency, the unmanned telescope has discovered 21 confirmed exoplanets and 850 candidates for further study.

TESS was launched on April 18, 2018, from Cape Canaveral Air Force Station atop a SpaceX Falcon 9 rocket with the goal of carrying out the most comprehensive exoplanet survey to date. The successor to the Kepler mission, TESS is tasked with examining 200,000 of the brightest stars in our galaxy spread over an area that is 400 times greater than that observed by its predecessor.

To do this, TESS has been placed in a lunar resonant orbit, which is an elliptical orbit between 108,000 km (67,000 mi) and 375,000 km (233,000 mi) where the spacecraft circles the Earth every 13.7 days with an inclination of 37 degrees to the Moon's orbit. This keeps TESS 90 degrees out of phase with the Moon, so the latter's gravitational field can't disrupt the spacecraft's trajectory.

In addition, this orbit gives TESS a clear view of the whole sky with fewer chances of looking at the Sun, Earth, or Moon, allows it to maintain its temperature, and keeps it well out of the radioactive Van Allen belts.

Since it began its sky survey in July 2018, TESS has used its four large cameras to scan 24 by 96 degree sections of the sky for periods of 27 days. This allows it to seek out three consecutive dips in the brightness of nearby stars that would suggest that they might have planets circling, Data from these stars is forwarded to ground stations for more detailed studies to confirm whether the cause is actually a planet passing in front of the star.

NASA says that TESS completed its survey of the southern sky on July 18, 2019 and has now turned its attention on the Northern Hemisphere.

In addition to exoplanets, TESS has also had success finding comets both inside and outside the solar system. The first of the latter was in the system of Beta Pictoris, which is located 63 light years from Earth. There the telescope was able to identify three comets with detectable tails – the first to be seen orbiting another planet in the visible band of the light spectrum.

Another plus is that because TESS looks at each section of the sky for about a month, it's been able to find six supernovae so far in other galaxies long before ground observatories could see them.

"The pace and productivity of TESS in its first year of operations has far exceeded our most optimistic hopes for the mission," says George Ricker, TESS's principal investigator at MIT. "In addition to finding a diverse set of exoplanets, TESS has discovered a treasure trove of astrophysical phenomena, including thousands of violently variable stellar objects."