Israel's Prisons Service has hospitalised 40 Palestinian inmates who have been refusing food for over a month in protest against the terms of their imprisonment, spokeswoman Sivan Weizman said Wednesday. 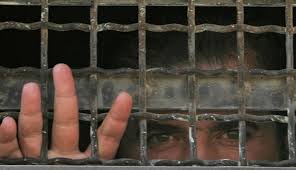 Describing their condition as "reasonable" Weizman told AFP they had been taken to hospital at different stages.

But Palestinian officials said that in many cases their lives were in danger, and urged international pressure to find a solution.

All the strikers are administrative detainees, and have refused food for nearly five weeks to protest against their being held without trial, Weizman said.

They were being treated at nine different hospitals.

Weizman said other inmates had joined the strike since it started, and there are now 240 refusing food. She said the number transferred to hospital was expected to rise.

Palestinian prisoner minister Issa Qaraqe said some of the strikers were in a "very grave" condition.

Speaking to AFP, he said Palestinians officials were in touch with the Israeli side "to avoid any complications that could lead to prisoner deaths."

Qaraqe gave Voice of Palestine radio a graphic account of the prisoners' condition.

"Most are vomiting blood and fainting. They can't walk, they're in terrible pain," he said.

"We are afraid some will die if the situation continues and Israel keeps using the same measures against them.

"In the last two days there has been the daily transfer of prisoners from one prison to another, one cell to another, exhausting them and making their situation worse."

"It's clear that prison authorities are trying to break the strike in any way possible, even if prisoners die," Qaraqe charged, calling for the UN Security Council to "move against Israel's intransigence."

About 5,000 Palestinians are being held in Israeli prisons, nearly 200 of them under administrative detention orders, which allow suspects to be jailed without trial for up to six months.

Such orders can be renewed indefinitely by a military court.
AFP
Share to
Tags
Israel ، hospitalises ، Palestinians ، Weizman
Your Comment