TEHRAN, Jul 7 - On the evening of July 26, Bahraini embassy staff in London attempted to throw a protester, one Moosa Abd-Ali, off the roof. 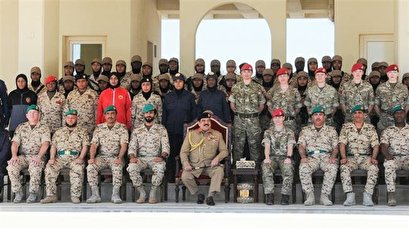 TEHRAN, Young Journalists Club (YJC) -Moosa Abd-Ali, along with fellow protesters on the ground, was protesting the planned execution of two activists by the Bahraini regime.

The protest proved fruitless as the two activists, Ali al-Arab and Ahmed al-Malali, were executed the following morning.

However, the protest was remarkable for two reasons: first, it showcased the willingness of local Bahraini embassy staff to resort to attempted murder; second, instead of arresting the culprits, the Metropolitan police arrested the victim, Mossa Abd-Ali.

Hitherto, the Foreign and Commonwealth Office (FCO) has not shown any reaction to this incident. This is not surprising however in view of Britain’s consistently strong support for the minority sectarian regime which holds sway in Bahrain.

Britain’s support for the Al-Khalifas is driven by a wide range of strategic, security and political motives.

The establishment of this permanent British military base is entirely in keeping with the UK’s longstanding military ties with the tiny Kingdom of Bahrain.

Prior to Bahrain gaining independence from Britain in 1971, the UK maintained the HMS Juffair royal navy base in Bahrain.

British support for the sectarian dictatorship in Bahrain came into sharp focus following the Bahraini people’s uprising against the rule of the Al-Khalifas in early 2011.

Focussed on the pearl roundabout in Manama, Bahraini protesters from all religious backgrounds held daily protests against the dictatorship of the Al-Khalifas.

Apart from widespread discrimination and internal repression, the protesters were also venting their anger at the Al-Khalifas’ alliance with the Saudi regime, in addition to its dependency on Western powers.

The Bahraini regime’s response to peaceful protests was to use widespread repression, including lethal force, to arrest the momentum of the Bahraini revolution.

What was Britain’s reaction to this vortex of repression? Not only did Britain fail to condemn the use of lethal force by Bahraini security forces, but in fact the UK has aided and abetted Bahrain’s system of repression by supplying personnel, equipment and expertise.

Bahraini activists were quick to point out that the widespread use of torture in Bahrain was instituted by the British before the tiny Kingdom gained independence in 1971.

Charles Belgrave, a British official who developed Bahrain’s policing and judicial infrastructure between 1926 and 1957, established torture as a staple of local policing.

Torture methods included beating, sleep deprivation and burning. According to Amnesty International, and other human rights organisations, such methods continue to this day.

Belgrave’s modern equivalent was Ian Henderson who led the Bahraini General Directorate for State Security Investigations (now known as the National Security Agency) from 1966 to 1998.

In a hard-hitting report in February 1996, the Independent identified Henderson as the “most feared of all secret policemen” in Bahrain. Entitled “Briton at the heart of Bahrain’s brutality rule”, the report claimed that Henderson had “torturers” on his staff.

But the most revealing and significant aspect of the report was the identification of Henderson as the “power behind the throne” of the Al-Khalifas.

The British tradition of implanting senior policemen at the commanding heights of the Bahraini security system continues unabated.

Yates is effectively the link between the Al-Khalifas and the British secret services. This was made clear in June 2012 when Yates accompanied Bahrain’s interior minister on a visit to London where they met the Director General of the security service MI5 and other senior British security officials.

Instead of “reforming” Bahraini police and security forces, Yates has spent most of his time attacking Bahraini protesters and dissidents. Yates once even described the protesters as “criminals attacking unarmed police”.

Bahraini activists view Yates as the embodiment of London’s long security arm in Manama. One leading pro-democracy activist, Ali Mushaima, even called on Yates to leave Bahrain, saying he is not welcome there.

The UK’s strong ties to Bahrain go far beyond policing and security. Britain engages the Bahraini dictatorship at the highest level, as demonstrated by the Queen’s strong bond with the Bahraini King Hamad bin Isa al-Khalifa.

The Bahraini King was pictured with Queen Elizabeth II at the Windsor horse show in May.

In view of the British royal family’s close links to their counterparts in Bahrain, the UK tries to promote Bahrain at every opportunity. This is particularly evident in the field of motor racing, where Formula 1 (F1) held its first race in the Middle East in 2004 in Bahrain.

Now the Bahrain Grand Prix has become a fixture of the F1 global circuit, despite drawing protests from Bahraini pro-democracy activists. Bernie Ecclestone, the former British chief executive of the Formula One Group, was notoriously dismissive of Bahraini protesters, once describing the idea of giving them a platform as “stupid”.

British academic Marc Owen Jones has described the formation of a “neoliberal” form of colonialism in Britain’s relationship with Bahrain where the influx of private British citizens and companies “who perform vital security functions” obscures “formal state responsibility”.

This type of relationship came into sharp relief late last year when it was revealed that Gamma Group, a British spyware manufacturer, had sold its flagship “FinFisher” software to the Bahraini government.

Bahraini pro-democracy activists, who have been targeted by the software, are currently suing the company.

On a related point, major British Public Relations firms, including Big Tent Communications, M&C Saatchi and the now defunct Bell Pottinger, have serviced major contracts for the government of Bahrain.

The depth of Britain’s multifaceted relationship with Bahrain exposes the hollowness of London’s rhetoric on democracy, human rights and the rule of law.

Above all, the relationship demonstrates that Britain is willing to service and protect the worst autocrats in the region in order to safeguard its economic, political and strategic interests.