TEHRAN, August 4 - A magnetic explosive device attached to a bus carrying media workers in the Afghan capital, Kabul, has killed at least two people and injured four others, officials say. 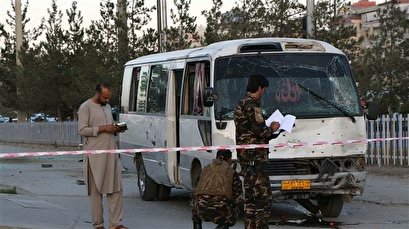 TEHRAN, Young Journalists Club (YJC) - Interior Ministry spokesman Nasrat Rahimi said that the casualties were caused when a “sticky bomb” went off around 5:30 pm (1300 GMT) in Kabul on Sunday.
“[The] bus carrying the employees of Khurshid TV exploded in the Taimani area,” the spokesperson said, referring to a bustling neighborhood in central Kabul. “Two bypassers were killed, and four others, including three employees of Khurshid TV were injured.”
Pictures circulating on social media showed a white minibus with extensive damage to its front.
Afghan President Ashraf Ghani called the bus attack “a war crime.”
“I strongly condemn the attack on Khurshid Media. Deliberately targeting media and civilians is a war crime and those responsible will be held accountable,” he wrote on Twitter.
No individual or faction has yet claimed responsibility for the latest attack, but militant groups have attacked reporters in the past over what they view as biased or negative coverage.
In June, the Taliban, which controls vast part of the country, said local Afghan media would be targeted if they continued covering anti-Taliban announcements made by the Kabul government.
In 2016, a Taliban bomber rammed his car into a bus carrying employees of Tolo TV, the country’s largest private broadcaster, killing seven journalists.
According to the Committee to Protect Journalists (CPJ), Afghanistan was the deadliest country in the world to be a journalist in 2018, with 13 deaths. The International Federation of Journalists said 16 journalists were killed last year.
Afghan ‘insider attack’ kills several policemen
In a separate development on Sunday, at least seven Afghan police officers were killed when a group of colleagues thought to be loyal to the Taliban opened fire on them in the southern province of Kandahar.
Jamal Naser Barekzai, spokesman for Kandahar’s provincial police chief, said the attack took place at a police checkpoint in the troubled region.
“There was an insider attack involving eight Taliban infiltrators at a police post in Shah Wali Kot district this afternoon, in which seven policemen were killed, one injured,” Barekzai said. “The Taliban infiltrators have fled, and we have deployed additional forces to the area.”
Another security official put the toll at 11, while the Taliban claimed their infiltrators had killed 14 “gunmen.”
“Insider attacks” are a constant threat in Afghanistan for US-led Western and Afghan forces alike. On July 29, an Afghan soldier killed two US troops as they were visiting an Afghan army base in Kandahar.
The United States and its allies invaded Afghanistan in 2001. While the invasion ended the Taliban’s rule in the country, it has failed to eliminate the militant group. The Daesh terrorist group has also emerged in the Asian country more recently.
The administration of US President Donald Trump is currently negotiating with the group to facilitate a withdrawal of US troops.
Source: Press TV