TEHRAN, August 5 -The commander of Iran’s Navy has dismissed as insignificant recent actions by the United States and the United Kingdom to escalate the situation in the Persian Gulf region. 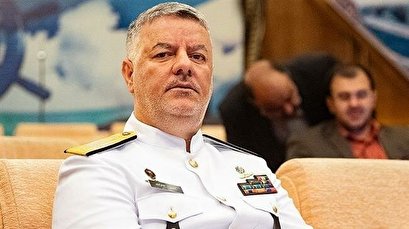 TEHRAN, Young Journalists Club (YJC) -Rear Admiral Hossein Khanzadi made the remarks on the southern Iranian Kish Island on Sunday after being asked about his opinion on the developments concerning the region over the past weeks, Fars News Agency reported.

“Nothing has happened in the region…and the show that arrogant countries, most importantly the US and the UK, put on is only a big bluff and a dishonest act aimed to create the impression that the region is unsafe,” he said.

“This is while the region is perfectly safe,” the official said, calling the efforts futile.

The United States has been pushing its regional allies to form a coalition force that would supposedly ensure the safety of foreign vessels sailing through the Strait of Hormuz in the Persian Gulf.

Britain has also dispatched three warships to the Persian Gulf after Iranian forces detained a British tanker that had collided with a fishing boat in the Strait and refused to heed its distress calls afterwards.

Both Washington and London have been trying to justify escalation in the strategic waters by accusing Iran of trying to destabilize shipping activities in the Persian Gulf in response to renewed American sanctions, specially on its exports.

Tehran has vowed to keep selling its oil despite the bans, but has invariably spurned using violence to make that happen.

Key Washington allies Germany and Japan have, meanwhile, refused to join the US-proposed force, and France has expressed reservations.

Bloomberg also reported that the US’s efforts to build the coalition “continue to bear little fruit,” noting that major ally Australia was still undecided whether to join.

It cited Australian Defense Minister Linda Reynolds as saying after a meeting with US Secretary of State Mike Pompeo and Defense Secretary Mark Esper in Sydney on Sunday, that Canberra was "deeply concerned" about heightened tensions in the region, and called the US request "a very serious one, and it is a complex one."

Former Australian foreign minister Bob Carr, meanwhile, warned against supporting any such US-led mission, saying that any such coalition would ensure a direct, large-scale military conflict between the US and Iran.

“It’s altogether appropriate for the Australian ministers to take their time with this request from our US ally,” he said.

Khanzadi also pointed to the prospect of joint naval maneuvers by Iranian and Russian forces in the future.

He said an agreement had been signed between Iranian and Russian naval officials in this regard last week, and that the drills will go underway by the end of year.