TEHRAN, August 5 -The Indian government has scrapped the special autonomy status for the disputed region of Kashmir as part of attempts to fully integrate the Muslim-majority region with the rest of the country. 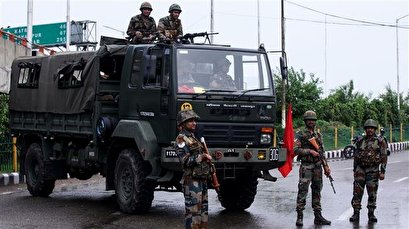 TEHRAN, Young Journalists Club (YJC) -The Indian Ministry of Home Affairs announced on Monday that India's President Ram Nath Kovind had signed a decree abolishing Article 370 of the constitution that grants a measure of autonomy to Jammu and Kashmir, including the right to draft its own laws.

The decree declared the measure came into force "at once."

The president also moved a bill proposing that the Indian-administered part of Kashmir be divided into two regions directly ruled by New Delhi.

The government in New Delhi lifted a ban on property purchases by people from outside Jammu and Kashmir, opening the way for Indians to invest and settle in the disputed region like any other part of India, a measure likely to provoke a backlash in the territory.

The controversial move came after large parts of the Muslim-majority territory was placed under lockdown, with mobile networks, internet services and telephone landline services having been cut.

Moreover, prominent political leaders in the Indian-administered region of Kashmir were placed under house arrest and the Indian paramilitary forces deployed thousands of extra troops across the region, raising fears of a crackdown.

Indian Prime Minister, Narendra Modi, had earlier pushed for radical political changes in Jammu and Kashmir even before he won a re-election in May.

Modi said the old laws had hindered Kashmir's integration with the rest of India.

The Indian government's move on Monday to strip Kashmir of the special autonomy it has had for seven decades prompted a furious response from nuclear-armed rival Pakistan.

Pakistan's foreign ministry denounced the move as "illegal" in a statement, saying, "as the party to this international dispute, Pakistan will exercise all possible options to counter the illegal steps."

Meanwhile, a senior Pakistani security source said that a meeting of the Pakistani military's top commanders had been called for Tuesday.

Kashmir has been split between India and Pakistan since it was partitioned in 1947. Both countries claim all of Kashmir and have fought three wars over the territory.

Indian troops are in constant clashes with armed groups seeking Kashmir’s independence or its merger with Pakistan. India regularly accuses Pakistan of arming and training militants and allowing them across the restive frontier in an attempt to launch attacks. Pakistan strongly denies the allegation.

In recent years, southern Kashmir has seen intense fighting between Indian forces and armed Kashmiri fighters, who are demanding independence for the Himalayan region.

The conflict has left tens of thousands dead, mostly civilians.