TEHRAN, August 5 -The United States and South Korea have begun their annual joint military exercise despite North Korea’s warning that doing so would jeopardize the denuclearization talks between Washington and Pyongyang. 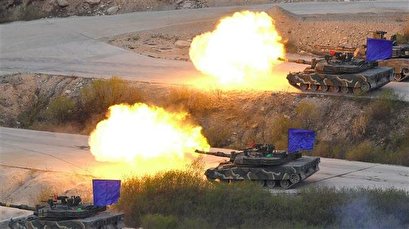 TEHRAN, Young Journalists Club (YJC) -This comes after a recent short-range missile test by the North, which President Donald Trump said did not pose any threat to the United States.

On July 25, North Korea test-fired a series of short-range projectiles in a first since leader Kim Jong-un's meeting with Trump at the demilitarized zone (DMZ) between the Koreas in June, where they agreed to resume stalled denuclearization talks.

Pyongyang called one of the projectiles a "solemn warning" to Seoul against conducting the mainly computer-simulated drills with Washington.

"It is being conducted,” Jeong said at a hearing at the National Assembly, but did not provide further details as to where it was taking place and how long it would last.

“My view is the fact that we are actually staging the joint drills is more significant than the title,” he said.

On Wednesday, a senior US defense official said that the US did not plan to make changes to its military drill with the South in spite of Pyongyang's warning.

“No adjustment or change in plans that we’re aware of or are planning,” said the US official, speaking on the condition of anonymity.

“The main thing you want to test, exercise, practice is to make decisions in a combined decision making environment because we have an integrated command structure,” the official added.

That thaw later led to summits between Trump and Kim to discuss the demilitarization of the Korean Peninsula, the first of which was held in Singapore in June last year and the second in Vietnam in February.

The Singapore summit made little progress, mainly because Washington refuses to lift its harsh sanctions on North Korea.

The Vietnam summit also broke up without an agreement or even a joint statement as the two sides failed to reach a consensus. Trump walked away from the summit, claiming that Kim had insisted on the removal of all sanctions on North Korea. Pyongyang, however, rejected that account, stressing that it had only asked for a partial lifting of the bans.

Following the failure of the summit, the North repeatedly warned that it was considering ending talks on denuclearization and resuming its nuclear and missile tests over what it described as “the gangster-like stand” of the US.

In their third, brief meeting at the Korean border at the end of June, Kim and Trump agreed to kick-start working-level talks.