US poised to renew anti-Iran nuclear sanctions waivers in blow to hawks: Report

TEHRAN, August 5 -The US is reportedly expected to extend waivers from sanctions that allow the remaining signatories to a 2015 nuclear deal to continue their nuclear cooperation with Tehran, in what would be a blow to ardent Iran hawks in the White House. 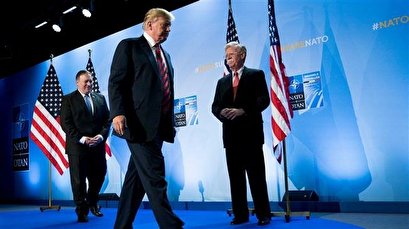 The US State Department last extended the sanctions waivers in May and the expected renewal will give five Iranian nuclear projects another 90 days of immunity.

The sources further said Mnuchin had prevailed over the objections of US Secretary of State Mike Pompeo and National Security Adviser John Bolton — two staunch sponsors of economic pressure and tough action against Iran.

Mnuchin “argued to Trump that if the sanctions were not again waived as required by law by August 1, the United States would have to sanction Russian, Chinese and European firms that are involved in projects inside Iran that were established as part of the 2015 nuclear deal,” the officials added.

The five programs include modifying the heavy water reactor in Arak, converting the Fordow enrichment facility as well as fuel exchanges at the Bushehr nuclear power plant and the Tehran research reactor, The Washington Post reported.

It also quoted a senior official in the Trump administration as saying that Washington’s goal of ending the waivers still remained.

“We still have the goal of ending these waivers,” he said. “These waivers can be revoked at any time, as developments with Iran warrant. But because of the Treasury Department’s legitimate concerns, we’ve decided to extend them for now.”

Daryl Kimball, president of the Arms Control Association, said that the nuclear projects should be saved for their intrinsic value as Trump’s “maximum pressure” campaign against Iran was not going to work anyway.

“It’s in the US national and international security interest to extend these waivers to allow these projects, which were designed to make Iran’s nuclear programs more proliferation-resistant,” he said.

The US launched the “maximum pressure” against Iran after pulling out of the 2015 multilateral accord — officially named the Joint Comprehensive Plan of Action  —  and re-imposing the sanctions it had lifted under the agreement.

Analysts believe the rift in the White House on the issue and the broader Iran policy is the root cause of Trump’s mixed signals, which have often switched between belligerent rhetoric and overtures to Tehran.